Sam & Max Episode 205: What's New, Beelzebub? is the fifth and final game in the second season of Sam & Max episodic content, created by Telltale Games and published by GameTap. The episode was released on April 10, 2008 on GameTap, with a Windows release the following day. The episode is contained in the Season Two compilation Sam & Max Beyond Time and Space, which was released on May 16, 2008 on Steam, October 14, 2009 on Xbox Live Arcade, and March 9, 2010 on the Wii.

What's New, Beelzebub? follows directly from the end of Episode 204, where Sam and Max escaped a spaceship with Bosco's body by going through a soul sucking portal. The crime-fighting duo finds themselves on the banks of the river Styx with the objective of reuniting Bosco's soul with his body and uncovering the mystery of the portals and demonic possession that have plagued them all season.

Narrowly escaping the self-destruction of the mariachi's spaceship, you are unceremoniously dumped in an underground tunnel. Mr. Featherly will explain that you're on the banks of the river Styx, which is the passageway to hell. Harry Moleman nearby will tell you that Bosco's soul was on the last train to hell, so if you still want to save him you'll need to venture after him. Going up the ladder on the other side of the tunnel, you'll find yourself back on your street, although the bookstore has fallen underground and everything has shifted over, making Bosco's Inconvenience your new neighbor.

Harry said you need a token to get to hell, so you'll need to obtain one before you can get on the soul train and go after Bosco.

You can now ride the soul train by giving your token to Harry down in the subway. It's time to face the dark prince himself! 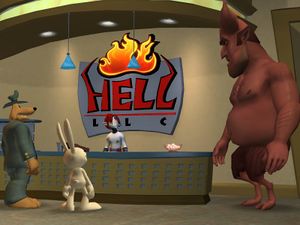 In Hell it's harder to get in to see Satan than you'd think. Jurgen at the reception desk and some of your other past nemeses working in the office area are no help at all. In the back of the main office, you'll find a door to a special area solely dedicated to Sam and Max and the miserable wretches they've contributed to sending to Hell. There are tons and tons of records here, but the most recent arrivals have their personal hells displayed up front with miniature dioramas. In the dioramas you will find souls such as Bosco's, Santa's, your car's and grandpa Stinky's. Also in this room is a meter rating the efficiency at which Hell is running. If you can free your friends' souls and send the efficiency plummeting, Satan will have no choice but to speak with you. Even when you free everyone's souls, you'll still need to win them from Satan, so an audience is mandatory.

The dioramas are accessed by first swiping a key card at the reader, then selecting which version of Hell you want to visit. The key card can be found on Brady Culture's name placard at his cubicle. Inside a diorama, you can use the "Exit diorama" icon in the corner at any time to leave. You can bring items you find in the dioramas out of them, and likewise you can use items on the dioramas to insert them. In each person's Hell, demons are causing them distress, either directly or indirectly, so your goal is to stop them from doing whatever's tormenting their charges.

Bosco's and the DeSoto's souls[edit]

In the theater diorama, you'll find Bosco naked up on a stage with his friends (cleverly disguised demons) all watching him from the audience. You need to distract the demons so Bosco isn't watched anymore. In the street diorama, you car has no juice anymore and drives through the city at a snail's pace. Work on both dioramas together to help each of them.

You've rescued Bosco's and the DeSoto's souls and reduced Hell's efficiency, but if you go out into the office, Brady Culture will receive a reprimand and Satan won't talk to you. You'll need to keep causing mischief to get his attention.

Santa's and the elf's souls[edit]

In the Santa's Workshop diorama, Santa is forced to recall a dangerous toy while being annoyed by three demon babies. He can't concentrate on his work while the babies are distracting him. Meanwhile, in the toy factory diorama, a worker elf is busily producing the Rex Skirmish Danger Hero action figure, but is going nowhere because Santa keeps sending it back. He wants to create the perfect toy and he's always fiddling with the toy to try and make it better. Help them out by getting rid of the babies and improving the toy.

With the babies gone, Santa feels like he's in heaven now. You'll exit the diorama and see that both Santa's and the elf's souls have been freed, although like the ones before them, they're still waiting for you win them back from Satan. Satan still won't talk to you at this point, as Hell is still running at 70% efficiency. You'll need to free the last soul to break Hell enough.

In the cooking show diorama, the demon girl Stinky is running the show while grandpa Stinky is just her lowly apprentice. In Stinky's personal Hell, he's the understudy on a cooking show with an audience of rats. If you talk with the guest rats, you'll find they have foul mouths and Hugh Bliss is on the verge of shutting down the show due to the bad language. Stinky's only hope is for you to get the show canceled and get him out of there.

With the show canceled, Stinky is free to leave and his soul will join the others outside the dioramas. With Hell broken, you just need to go confront Satan and get him to free your friends' souls.

Satan is willing to let your friends go, as long as Sam signs a contract with him. A bit too hastily, Sam signs the contract, in which he agrees to give his soul to Satan. Now that Sam's soul belongs to Satan, he ends up in his own personal Hell, just like the people he so recently freed.

You end up back in your office, but instead of being partnered with Max, a demonic Peepers is your new sidekick. You can't leave the office and Satan has included some just-out-of-reach ways to kill Peepers as added torment. You'll be stuck in this Hell until you find a way to get rid of your demon, just like in the other Hells. Before you leave, make sure to grab the bone saw sitting on Max's desk.

Now that you've escaped, head out to the main office to talk with Satan again. 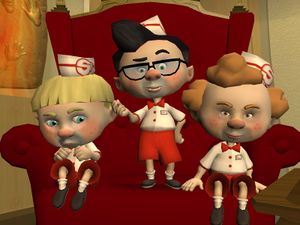 Hell is really run by the Soda Poppers!

Outside, you'll find that Satan has his own bosses: the Soda Poppers. Ever since they got a taste of evil when they beat Brady Culture, they've been working to take over Hell and impose a new reign of efficiency and terror. You've been unwittingly helping them by messing with Hell's workings and even before that during other episodes. After firing Satan and thanking you for helping them get rid of him, the Soda Poppers go over their plan for demonic domination of the world before going off to each do their parts.

They each plan to perform an act of evil to consolidate their power:

You'll need to find them all and stop each one. When you get back up to your neighborhood, talk with Satan and rummage through his stuff for some good items.

Whizzer is attempting to recreate the Original Sin by getting girl Stinky to buy his fruit cider made from fruit of the tree of knowledge. She's hovering on the edge of accepting the deal, so you'll need to stop her before she gives in. Before you leave, make sure to grab one of the bottles of fruit cider Whizzer is hawking.

With both Stinky's working together, they're able to repel Whizzer and send him packing back to Hell.

You'll find Peepers trying to seduce Sybil in her shop. He's using some kind of glamor on her, making himself appear differently from his true form. Somehow you'll need to break the spell so Sybil can see him for what he really is.

With the spell broken, Sybil rejects Peepers and he runs back to Hell. There's just one more Soda Popper left.

Specs is attempting to win Chippy's soul in a Charlie Danielsesque musical challenge. If Chippy can produce a better sound than Specs, he'll win Specs' fiddle of gold. If Specs wins, however, he gets the machine's soul. Chippy's initial effort is a bit lackluster, but luckily he gets infinite do-overs. You'll need to find a way to help Chippy beat Specs to save his soul.

Now that the last of the Soda Poppers has been driven back to Hell, you can go tell Satan the good news. Satan decides it's time to win Hell back from the Soda Poppers and he's taking you with him.

Send the Soda Poppers to Hell[edit]

Back in Hell's main office, the Soda Poppers reveal their true forms and banish you to the pits of Hell. Their banishing spell consists of ringing a bell, closing a book and blowing out a candle. Luckily for you, you saved yourselves from this very predicament back in Episode 201, so you fly right back up to the office in Santa's sleigh. Flying around the office releasing snowflakes in your wake, the office is soon covered in snow and an ice cream truck pulls up into the office as well. While the Soda Poppers and Satan are engaged in a snowball fight, see if you can turn the tables on the Soda Poppers.

The Soda Poppers have been defeated and must spend the rest of eternity trapped in the pits of Hell. Now you can go to Sybil and Abe's wedding at the White House. Tune in to see what's in store for Sam and Max in the third season, starting with Episode 301.

The COPS can't do anything for your car at first, since it died while you were time traveling in the last episode. Until you get the car's soul back from Hell, you won't be able to drive it at all. Once you do however, it's possessed and the COPS won't go near it. Luckily you can still play their newest driving game and win decals. Winning all the decals gets you a new grill, and if you've collected the car upgrade in each of the previous episodes of the season (except Episode 204), you'll get the final upgrade.

For this driving game you have no control over the car, as it's possessed. You can shoot though, and the goal of the game is to shoot demonic rats that were released from Hell before your car runs them over. The DeSoto will swerve around trying to run down the rats, and you have to quickly shoot the rats in the road and on the sidewalks before the cars gets them. You'll have 60 seconds to accomplish this feat, and every time you do, the next score you have to achieve is raised by ten rats. When you shoot a rat your score goes up by one, but it is decremented by one for every rat the DeSoto runs over.