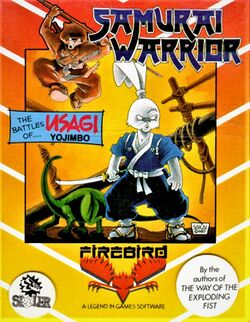 Samurai Warrior: The Battles of Usagi Yojimbo is a computer game released for the Commodore 64, ZX Spectrum and Amstrad CPC platforms in 1988, by the now-defunct label Firebird. It is based on the comic book Usagi Yojimbo, which features the adventures of an anthropomorphic samurai rabbit named Miyamoto Usagi. The game closely follows some of the themes of the comic. The package artwork comes from the cover of the comic book Anything Goes #6. The game was released in the United States under the title Usagi Yojimbo as part of the Thunder Mountain Action Pack, Vol. 1. It was contained on Disk 1, Side 1 along with the games Great Escape, Paradroid, and (on Side 2) Implosion. The packaging for this version used artwork from the cover of Usagi Yojimbo Volume 1, # 17 along with images from the other games included in the set.