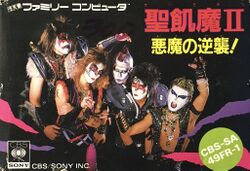 Seikima II (subtitled Akuma no Gyakushuu which means Devil's Counterattack) is an action game developed around the popular Japanese heavy metal band of the same name. It was developed by ISCO and published by the CBS Sony Group for the Famicom at the end of 1986. They later created a version for the MSX entitled Seikima II Special, which is essentially the same game with higher resolution and more colors, but lacks stage scrolling. The game is composed of 32 "rooms", 8 per stage, from which the player must collect every item, and rescue his four band mates. The game ends in a show down against the Greek god Zeus.

Most people, on first impressions, think that this band is quite akin to the western band, KISS. Thus, they dismiss the band as a 'rip-off'. However, those people are very mistaken as the similarities end at the traditional kabuki-style makeup and Seikima II prove to be a legendary band in their own right.

Formed way back in late 1982 by Damian Hamada, their formation is said to have been planned 23 years prior, in the realms of Hell. A group of demons were sent to Earth and grew up amongst the human race until the year B.D.17 (1982) where a small number were assembled by Damian Hamada, the self-proclaimed "prince of Hell", in order to form the "Demon’s Heavy Metal Band". Their mission was to conquer the Earth with their music; their deadline was the end of the century. This is where the band name comes from; the kanji is pronounced as "seikima" and the 'II' is pronounced as "tsu" and when both parts are put together, "seikimatsu" is formed and this is a pun on the Japanese phrase for "the end of the century".