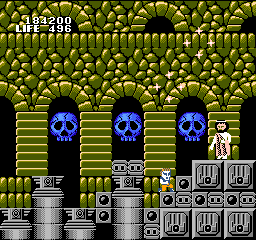 Once you have rescued all of your band mates, the only thing left to do is take the fight directly to Zeus himself and punish him for imprisoning your band. This is a very short zone, as you are placed directly into the fight right from the beginning. All you must do is hit Zeus in the body a number of times with your weapon and he will be defeated. He tosses the same magical rings at you as the knight from the eight areas of the previous Zones. Whenever you throw a weapon he jumps. If you aim your weapon at his feet, he will jump over the weapon and escape damage. If you aim for the top of his head, he will instead jump into the weapon and get hit by it. Zeus can be defeated with Bats (fourth upgrade) in eight hits.

Once he is defeated, proceed to the right and jump up to the book on the pedestal to win the game.