From StrategyWiki, the video game walkthrough and strategy guide wiki
< Shining Force: The Legacy of Great Intention
Jump to navigation Jump to search

The scene is set by Varios being called to the King. The first thing to do is to go to the palace, although you can wander around town and talk to the people there. When you reach the palace, talk to the King. He tells you of the Guardanian people being left as the keepers of the Sealed Gate of the Ancients. He tells of how Guardiana is threatened by the sightings of some of the Runefaust army at the Gate of the Ancients. Accept the task of killing the monsters at the gate and you will be told to gather your troops and return to the King. You can now explore the castle if you want, but to collect your troops, just head back down into the village. Luke the Warrior, Ken the Knight, Tao the Mage, Hans the Archer and Lowe the Healer join the Shining Force. 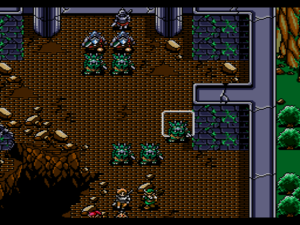 Starting deployment of the first battle.

The first battle will be easy - while the opponents outnumber your team, the enemy forces are weaker than your level 1 characters, and are strict melee units. The front wave consists of three goblins, which are easily overpowered. At the back are two goblins, two dwarves, and one rune knight, all who will prefer to defend until your characters enter attack range.

When the battle is over, the Rune Knight tells you that Lord Kane of Runefaust is attacking Guardiana now. There is a second earthquake and Nova tells you to head back to Guardiana as fast as possible. When you emerge from the Gate of the Ancients, Nova informs you that the earthquake blocked the road and you must battle through the countryside to reach Guardiana. 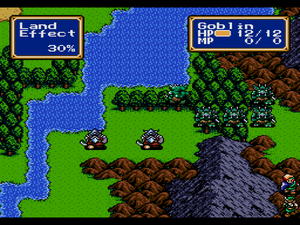 Starting deployment of the first battle.

THe earthquake, having blocked direct access to Guardiana, requires you to travel into the mountains to the north. While three goblins are located there, they will disengage until they reach the open terrain, allowing you to use archers and other ranged units to defeat them. Next, a group of goblins and dwarves will try to block passage through the forest, but these enemies will fight back. After fighting this group, heal back to full health.

When you reach Guardiana, you will need to defeat one dark dwarf and two rune knights. Since they are all melee attackers and will hold their position, you can use ranged attacks to soften the rune knights. As soon as one of the knights falls, storm the bridge with your remaining attackers.

When you win, enter Guardiana. You arrive too late, as the gate guards tell you what has happened. Guardiana held off the attack, but suffered great casualties. Many homes have been damaged around the town as you will see. The first place to go is to the undamaged pub (The Green Dragon) to the left of the shop. Talk to Gort on the right and he will join the Shining Force. Next, head for the castle. The King's advisor will rush out and tell you that Lord Kane of Runefaust has injured the King and Lord Varios. You follow him into the throne room where everybody is. Kane and Varios argue over the treasure of Guardiana. Varios refuses to let Kane take it so Kane uses his Sword of Darkness to kill Varios. Suddenly Mae, the daughter of Varios, charges at Kane when she sees her father killed. Kane knocks her back then disappears. You and Mae then go to the King. With his dying breath, the King tells you that the Gate of the Ancients is the only access to the Tower(?) and it can only be opened by the key. He tells you to find it before it falls into the hands of evil, and that the gate should never be opened by them. He asks you to find out why Runefaust is interested in the gate. He then tells Mae to help you in your mission and avenge her father. He then gives you a message for his daughter, Anri, who is in Manarina, to stay strong for her people. The King then dies. Mae tells you that now is not the time for grief and that you should go to Alterone next. Mae joins the Shining Force. Now go to the treasure room to the left of the castle where you couldn't get into before. There are 7 chests there containing 1 Antidote, 1 Medical Herb, 50 Coins, 1 Angel Wings, 1 Power Potion and 1 Defence Potion. The last chest is empty. Give the Angel Wings to Lowe and the Antidote to Gort. The 2 Potions can be used now or saved for later. If saving them (for when you drop stats slightly when you get promoted), let Gong keep the since he needs no weapons to carry. Next head south into the town. Go to the shop and talk to the previously mad shop keeper. Buy a Hand Axe for Luke and sell his Short Sword in return. After this, save your game at the church, then leave the town. Nova informs you of enemies up ahead on the road to Alterone. This is Battle No 3.

When you win, enter Alterone. As you go through Alterone, search every house and talk to everyone to gather information on your quest. There is one large building which contains three merchants, one of whom asks about Guardiana. He asks if the rumour is true, and then says that a friend who told him has gone to inform the King of Alterone. There is a lady next to the pond to the right hand side of Alterone. If you push the trolley into her, she becomes mad and when you talk to her, she pushes you into the pond. Don't worry, as this is the only way to get the chest in the middle of the pond, which contains a Power Potion. To get back, walk off the ledge into the pond again. If you talk to the kid at the church, he tells you the King of Alterone called the vicar to the castle. After you have gone round the town, enter the castle and the guards will let you in. Go around the castle collecting chests and talking to everyone EXCEPT the King, who you should talk to last of all. When you do talk to the King he asks you to follow him to go and consult a tactician. This allows you access to the room behind the throne room and the chest which contains a Bread of Life. When you have collected this head downstairs to find the King, 2 Rune Knights and Lord Kane of Runefaust. Talk to Kane and he tells you that Alterone has already surrendered. Kane orders you to be locked in the dungeon. The King just wants what is best for Alterone but it is clear Kane is commanding him. You are taken away and thrown in a cell with the vicar of Alterone. The vicar tells you how he came here to warn the King, but Alterone had already surrendered to Kane. If you face the door and search, there is no way to get out, then footsteps approach. Khris the Healer unlocks your cell door for you. When you talk to him, he joins the Shining Force. He then shows you a secret tunnel that leads back to your headquarters. Save your game with the vicar and then go there. Talk to Nova for advice and have a look at your statistics of your troops. When you are done, go up the stairs and out into the town. Kane is here and orders his army of monsters to attack you. A messenger then appears and tells Kane that Lord Darksol wants him back in Runefaust immediately. Kane leaves and you enter Battle No 4.

When you win, go back into the castle and talk to the King of Alterone again. He asks your forgiveness. say yes and he will tell you to search the dragon's head. Talk to the King again and he will tell you to head towards Rindo and Manarina as someone should be able to help you there. Next, go to the dragon head (the head on the wall near the waterfall). Search it and there will be a chain inside it, which you should pull. Suddenly, the waterfall is blocked off at the top and a door is revealed. Go through this and keep going straight up to complete the chapter.