Shura no Mon is a strategy game with the appearance of a fighting game. Like a fighting game, battles take place in an arena with limited space, allowing for some movement toward and away from the opponent. Unlike a fighting game, instead of using a certain input for each move, you command Mutsu Tsukomo to use different moves through a menu. 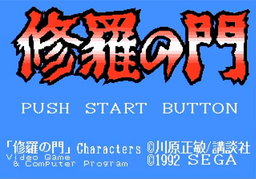 The first thing you'll see is the title screen. Don't press anything to see a short movie with some conversations between the main character and others. Press

to be taken to a menu. The three options are Start, Options, and Passwords. Press

at Start to be taken right into the story.

Pressing Start will take you to the first cutscene leading into the first fight against Kimura, which acts as a sort of practice fight.

Options are, obviously, the game's settings. You can change the controls and sound here. The default settings will be 01, 01, and A, B, C, and Start for the controls. Unlike some other Mega Drive titles, Shura no Mon doesn't make use of the six-button arcade pad.

The Passwords option will let you type in a password gained after winning each fight. Type it in to start at the fight you were about to go through before. It can be accessed by pressing

(this will bring you to a new menu, with Start and Passwords instead of Start and Options). For a list of all passwords, see here.

You are Mutsu Tsukomo (陸奥九十九), a fighter looking for worthy competition against his Mutsu Enmeiryuu (陸奥圓明流) martial arts technique. Though only seventeen years old, Tsukumo's technique has been passed down for generations, and is claimed to have been unbeaten for 1000 years. Tsukumo tends to be underestimated due to his small size by other martial artists, but his burning desire to fight as well as his lack of interest in common motivations, such as money or power, draws others to him. He often travels with Maiko (舞子), the granddaughter of the dojo's director. 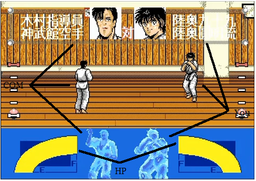 The battle system of Shura no Mon is quite simple, playing as an ordinary real-time strategy game. The portraits of the characters the battle is between will be at the top, and the sprites and HP bars at the bottom of the screen to coordinate with those. The sprites will occasionally change color, indicating the availability of a new skill, with five stages in total (progressing from blue, to green, to purple, to red, to yellow). There is also a balloon meter to the left and right of the screen, one for each fighter, representing concentration. The placement of the balloon on the meter determines the power of the attack used, and some attacks can only be used when the balloon is at a certain height on the meter. 圓明流奥義 (Magnificent Mystery) can only be used if the balloon is at the highest point. 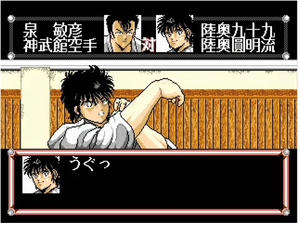 To use a skill, press

. Movement from both parties will pause until a skill is selected, which will then trigger a scene showing whether or not the skill was successful. Keep in mind that distance from an opponent, like the concentration meter, plays a part in the success of an attack. Attacks available at the start are one punch, the Proper Fist (正拳) and one kick, the Front Kick (前蹴り). Special skills require high momentum, as indicated by the stages of power (yellow being most powerful) and the balloon meter/concentration. To land finishers, you must be close to the opponent.

The menu will open automatically when the opponent attacks, opening up previously locked defensive options toward the bottom of the menu. While attack skills may change depending on the battle or concentration, defense skills are constant, and are broken up into two options: 受け技 (Receiving Skill) and 避ける (Avoid). The Receiving Skill options include:

The Avoid options include: