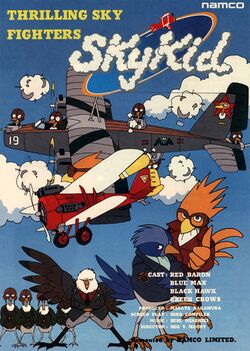 Sky Kid is a horizontal scrolling shooter arcade game, that was released by Namco, in 1985. The game is actually represented by a trio of titles - including the original, and two later revisions of the same game. The original game was the first game from the company to allow two players to play simultaneously. In that following year, Namco redesigned the game using new hardware and released it as Sky Kid Deluxe. This version contained all the elements from the original, and introduced new characters, along with four new missions inserted among the original twenty-one. That same year, Namco developed a version of Sky Kid for the Famicom, that was very similar to, but slightly different from, the originals. This version was brought back into the arcades, under the name of Vs. Super Sky Kid (sometimes referred as Vs. Sky Kid, or Super Sky Kid) utilizing Nintendo's Vs. System arcade hardware. All three games are fundamentally the same. Both players are piloting biplanes, in a First World War-era battle. They both have two abilities at their disposal. They can fire a gun with an unlimited amount of ammo (but a limited range), and they can perform a loop that makes them temporarily invulnerable. Their goal is to travel across the terrain, dodging all attacks that come from the air as well as from the ground, collect a bomb that is planted somewhere along the ground, and drop it on the mission target to destroy it. Some missions contain multiple bombs and targets - many missions also contain hidden Namco items (such as Pac-Man, Inky, the Special Flag, and a Pooka), and bonus point opportunities.

The Famicom version of the game was converted for play outside Japan by SunSoft. This conversion was also converted for play on the Game Boy and contained in the compilation Namco Gallery Vol. 3. Among the three versions of the game, only the original arcade version has been commonly included in Namco's various compilation titles. Sky Kid Deluxe has only been released in one compilation that was only released in Japan, Namco Collection Vol. 1 for Microsoft Windows. The original game was the last game to be released on on the Pac-Land hardware (a Motorola M6809 and a Hitachi HD-63701, run at 1.536 MHz). Sky Kid Deluxe used Namco's then-new System 86 hardware (two Motorola M6809s and one Hitachi HD-63701 running at 1.536 MHz). 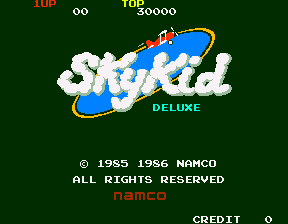