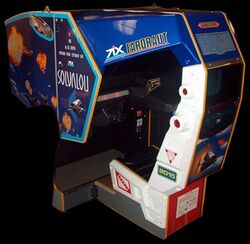 Solvalou is a first-person shooter arcade game that was released by Namco in 1991 only in Japan. It runs on Namco System 21 hardware, and is the third title in the company's Xevious series. "Solvalou" is also the name of the ship that the player controls in all three games - as well as the fourth and fifth ones, Xevious 3D/G and Xevious Arrangement. Not only was it the only title in the series to use a Yamaha YM-2151 FM sound chip for its songs and a C140 custom sound chip for its sound effects, but it was also the only title in the series to use an analogue joystick with two buttons and a sit-down cabinet (rather than an upright).