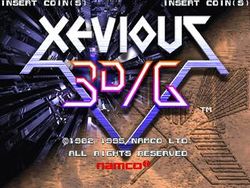 Xevious 3D/G is a three-dimensional shooter arcade game that was released by Namco in 1995 only in Japan. It runs upon the company's System 11 hardware, and is the fourth and final title in their Xevious series. Not only was it the only title in the series to position the camera behind the Solvalou rather than above it, but it was also the only title in the series to allow two players to play simultaneously (the 2nd player would take control of a red-lined version of the Solvalou as the 1st player's was blue-lined).