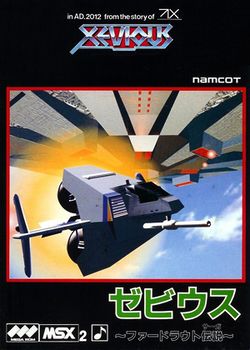 Players can select between two modes at the title screen: "Recon", a port of the original Xevious; and "Scramble", which is a new 16-area game with new enemies, new boss battles as well as the Andor Genesis, and four ships (Solvalou, Solgrado, Zeodalley, and Gampmission).

While the two games are advertised with the phrase "ファードラウト伝説", the games themselves bear two different names, although "saga" can be taken as a translation for "伝説". If so, both games would be "Fardraut Saga", although the PC Engine version never makes use of such a translation anywhere.