From StrategyWiki, the video game walkthrough and strategy guide wiki
< Sonic the Hedgehog
Jump to navigation Jump to search

This is the first zone of the game and the easiest of the six. This area is overflowing with trees, waterfalls, loop-de-loops and more. 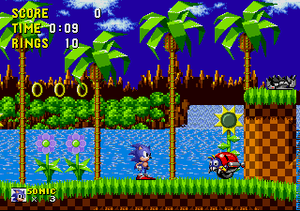 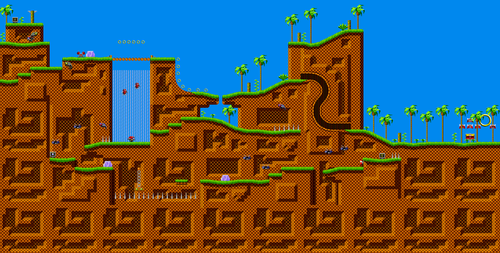 Here, you are introduced to the main villain of the Sonic series, Dr. Ivo Robotnik (often referred to as Dr. Eggman by Sonic and co.) You are given two platforms to attack Robotnik from (one on the left and one on the right.) Immediately stand on the right platform upon entering the area. When Robotnik enters from the right, begin attacking him before he pulls out his swinging weapon. When the pendulum comes towards you, jump through the small space between the ball and the main machine and head for the other platform to attack Robotnik. Eventually, the machine will be destroyed and you will be free to release the animals trapped in the nearby machine.