To enable a super powered version of your ship, enter the following code. It will allow you to switch between the Rapid-Fire ability and the Super Laster ability by pressing

to begin the game, and press

to switch back and forth between the two weapons. 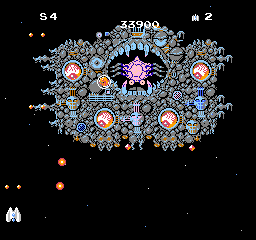 To begin the game at a much higher level of difficulty, enter the following code. Because it involves the microphone, it is only possible to enter this code using a Famicom with a mic on the second controller. All of the enemies, as well as many of the tiles, will be altered in appearance, and many enemies will fire heat seeking fireballs.

to begin the game.

How to play
Walkthrough
Appendices
Retrieved from "https://strategywiki.org/w/index.php?title=Star_Soldier/Codes&oldid=233175"
Hidden category: