Humor on the page[edit]

Zomg, Ryan, are you serious? I think Echelon set the tone for humor on that page the moment he said that he was a ninja, and put a picture of Batman on the page. If Echelon gets to be a ninja, I think it's fine if Rocky lives in the batcave, and if I'm eaten by a Grue. I love Grues! I almost bought a plush of that little guy for my wife, but now I'm rambling. Anyway, seriously, I think it promotes a happy sentiment if there's a little humor on that page. It certainly can't hurt. That's just my $0.02. Procyon (Talk) 20:06, 8 June 2007 (CDT)

I think a bit of humor is acceptable, but it should still be kept to a very professional tone. And Echelon gets to be a ninja because he runs the place :). Personally, I think the Batman is quite tastefully done. -- Prod (Talk) 20:09, 8 June 2007 (CDT)

So you say that humor is perfectly acceptable, do you? However if you look at Rocky's edit summary, it clearly said humour (which you did not mention was acceptable). Also, it appears Prod agrees with me on this one. Plus, Rocky could not aesthetically live in the bat cave, as the opening paragraph clearly states that we don't have one. SO HA! As for the Grue thing, I was actually thinking of uploading an image of a Domo Kun (aka an Uncyclopedia Grue) and using that as the topicon for StrategyWiki Administrators (I don't object to humor or humour on user pages, just keep it off of official pages). --SkizzerzTalk - Contribs 20:13, 8 June 2007 (CDT)

I just thought that Rocky was English, and had a colourful sense of humour and was trying to grow a moustache. Procyon (Talk) 20:19, 8 June 2007 (CDT)

OK, sorry about this guys, I didn't mean to start a wheel war, we really should Semi-Ultra-Mega-Triple Protect this page so only Server Guys™ can edit this or something, but seriously where else was I meant to put it.If you haven't niticed, my user page is a bit full at the moment, I've even had to put up my own ads at the top and left side of the page to stop it from falling into ruin :P. But in the end, before you kick me out into the harsh city, I've got one final thing to say as my duty as an admin.--Rocky 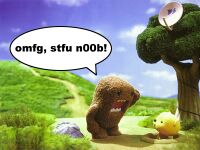 P.S don't delete this, it's going on my user page.--Rocky

I've just been on a deletion rampage, it's fun deleting all those hours of contribs, and easy too.--Rocky

Ultimate cheat code Rulez all the other options.--Rocky

However you spell it. One thing I've noticed is that some of the sysops seem to have some kind of speciality. Like Bmuig does fighting games and Najzere is good with templates and tables and stuff like that. And Zai looks through pages and does spelling and cleanup and stuff. I think there should be something about what the sysops are especially good at on the page, incase someone wants help with something specific, so they don't just look at the list and not know who they should ask. --Melon247 19:54, 11 February 2009 (UTC)