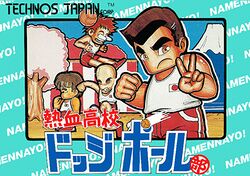 This guide is for the home version release. For the arcade release, see Super Dodge Ball.

The NES version of Super Dodge Ball was released in 1988, although it is not an exact port. It featured several differences such as special moves and full stats for individual team members, two additional teams (India and U.S.S.R.), and a "Bean Ball" mode. The soundtrack featured stage music appropriate for each country depicted in the game.

In 2020, the Famicom version was translated in Double Dragon & Kunio-kun Retro Brawler Bundle as Nekketsu High School Dodge Ball Club, with the original story and characters.