The World Ends with You

From StrategyWiki, the video game walkthrough and strategy guide wiki
Jump to navigation Jump to search
The World Ends with You | Table of Contents | Gameplay | Walkthrough 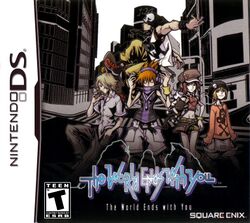 The World Ends with You, released in Japan as It's a Wonderful World (すばらしきこのせかい, Subarashiki Kono Sekai?, literally This Wonderful World) is an action role-playing game developed by Square Enix's Kingdom Hearts team and Jupiter for the Nintendo DS handheld console. Set in the modern-day Shibuya shopping district of Tokyo, The World Ends with You features a distinctive art style inspired by Shibuya and its youth culture. Development was inspired by elements of Jupiter's previous game, Kingdom Hearts: Chain of Memories. It was released in Japan in July 2007, and in PAL regions and North America in April 2008.

In the game, Neku Sakuraba and his allies are forced to participate in a game that will determine their fate. The battle system uses many of the unique features of the Nintendo DS, including combat that takes place on both screens, and attacks performed by certain motions on the touchscreen or by shouting into the microphone. Elements of Japanese youth culture, such as fashion, food, and cell phones, are key aspects of the missions.

The World Ends with You received positive reviews, which praised the graphics, soundtrack, and integration of gameplay into the Shibuya setting. The few common complaints were related to the steep learning curve of the battle system as well as the imprecise touch-screen controls. In the week of its release, the game was the second best-selling DS title in Japan, and the top selling DS title in the US.

A port for mobile devices, entitled The World Ends with You: Solo Remix, was released on iOS on August 27, 2012, and on Android on June 26, 2014. This version of the game was developed by Square Enix's mobile development team and h.a.n.d. within the course of the year. The game's combat system was reworked to accommodate the lack of a second screen.

In addition to combat changes, Solo Remix includes redrawn high-definition sprites and is optimized for the Retina display of iOS devices. The original soundtrack and additional remixes of these songs are included. Wireless and social media features are also included: Tin Pin Slammer can be played with other players via wireless connections, and the game can connect with the player's social media applications to display these as scanned thoughts from non-player characters within the game.

A port for the Nintendo Switch, entitled The World Ends with You: Final Remix, was announced in January 2018 and released on October 12, 2018. The port, based on the mobile Solo Remix version and with additional development from Square Enix and h.a.n.d., includes a new control system adapted for the Switch, specifically allowing for the use of the Joy-Con in addition to the touch-screen and optional co-op support for Neku's partner. An additional new scenario was added to this version.

The game takes place in a fictional version of the Shibuya shopping district in Tokyo, Japan. While everyday life goes on in the Realground (RG), the chosen dead are brought to an alternate plane of existence called the Underground (UG). The UG is also the venue for the Reapers' Game. By offering their most treasured possession to enter the Game, the dead gain the chance to contest for the prize: to be brought back to life or to transcend to a higher form of spiritual existence. Lasting a week, each Game is a contest to judge the worth of humanity. Players set out to accomplish objectives under the rules created by the Composer, who is a god-like entity who maintains Shibuya. Another Reaper, the Conductor, tasks other Reapers to obstruct the players' efforts. Failure to complete a mission will disperse the mind and spirit of the player or Reaper, thus erasing his or her existence.

editThe World Ends with You series