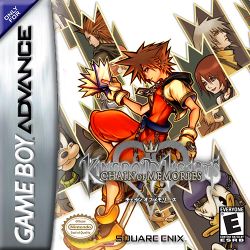 Kingdom Hearts: Chain of Memories (キングダム ハーツ チェイン オブ メモリーズ, Kingudamu Hātsu Chein Obu Memorīzu?) is an action role-playing game developed by Square Enix and Japanese studio Jupiter and published by Square Enix in 2004 for the Game Boy Advance. The game serves as an intermediary between the two larger-scale PlayStation 2 games in the Kingdom Hearts series. It was one of the first GBA games to incorporate full motion video (FMV).

The game takes place in Castle Oblivion, a mysterious castle kept by Marluxia. Sora and his teammates are told that the castle causes visitors to lose their memories upon entering. The lobby and areas between floors are white with flower-themed decorations, but each floor can be transformed into a different world from the first Kingdom Hearts game using "world cards" created from Sora's memories. Like before, many of the worlds are based on Disney films while the rest were created by Square Enix.