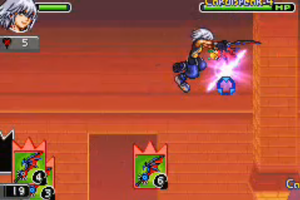 Focus on the bird!

This boss fight, once again, is much the same as the one in Sora's Story, which you should be seeing here all too often. The Soul Eater, like the Keyblade, won't do any direct damage given to Jafar. Your attacks will amount to nothing on his HP bar. Obviously, this means you have to look for either a new strategy or a new target. In this case, it's a new target. Iago will be flying around aimlessly with Jafar's lamp. It would probably have been much smarter of him to fly around behind Jafar, but that's besides the point. He's supposedly flying out of your reach. This is until Jafar brings down his fist and the platforms rise and fall. Simply jump on the risen platform and Iago should be in your reach. Attack away and Genie Jafar's HP will drop. You'll have to avoid Genie Jafar's attacks while you do this though, and these attacks include:

Once you've defeated Genie Jafar and get the card as well as the EXP, go back to Room 3 and strike the remaining door. Synthesize to make 3 or more. Clear the room of Heartless, go through the door, and you'll end up back at Castle Oblivion.