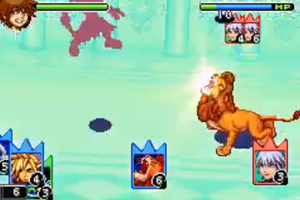 Use whatever you can to defeat him!

When Sora, Donald, and Goofy return to Castle Oblivion from Twilight Town, they are greeted by an unlikely visitor. It's Riku, and, although Vexen was just killed by Axel, he still seems to be dark. Sora tells Riku that Vexen is dead and he's free to turn away from the darkness, but Riku doesn't budge. He says he made a promise to Naminé, which confuses Sora - he was the one that made a promise to Naminé, not Riku. It's not long before both pull out the same good luck charm, and both claim it was given to them by Naminé. Riku gets angry at Sora and calls him a liar, and then becomes hostile. Naturally, you have to fight back. Like always, there is no real strategy to defeating Riku. All you have to do is dodge his attacks and bring in your own combos. This Riku battle may be pretty annoying mostly due to the fact that Riku is constantly card breaking your attacks. Use the Cloud Summon Cards and you'll be fine.

After defeating Riku, another world will become available. A cutscene will show Sora becoming angered with Donald and Goofy when they question Sora's purpose for finding Naminé. He leaves the two and storms off on his own. You'll lose the Donald Cards and Goofy Cards. Now go to the world that has just shown up, Destiny Islands. 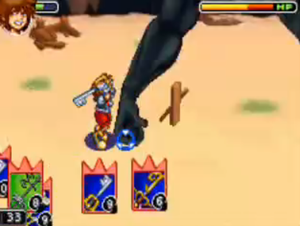 Attack whenever you get the chance!

Darkside is an easy boss battle frustrating only because of its large amount of health. Its health reaches a fourth bar, making it a rather time-consuming battle. Use Sleights and Summon Cards as well as combos to finish this boss off. Card break if you want to, but it's really not necessary as long as you have the right Item Cards. Darkside's attacks include:

Once you've defeated Darkside, a cutscene will have Naminé explain to Sora that everything he thinks - including his constant thought that he has to protect Naminé is false. Unfortunately, this only further confuses Sora. He starts to remember Kairi, but still doesn't quite remember her yet. All he can think of is Naminé. After the cutscene, you'll get the Oathkeeper. Now leave Destiny Islands.