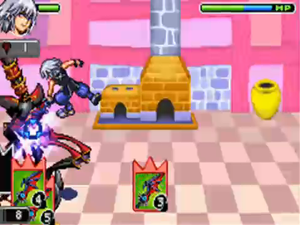 Aim for the center!

It'd be best to lock on for this boss, since the targeted area is the only place it will take any damage. From the get-go, you'll be able to tell that the Trickmaster has one specialty, and that specialty is fire. It'll usually be throwing torches around, preparing its next attack. This is the moment to attack the Trickmaster. Below are the attacks used by the Trickmaster:

Once you've defeated the Trickmaster, go back to Room 5. Strike the north door and synthesize using a card with a value of 1 or more. You'll reach Room 7, where you'll be able to leave Wonderland and return to Castle Oblivion.