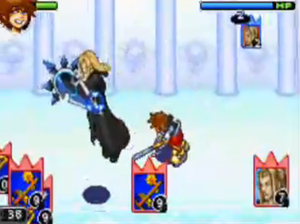 Get behind him to land an attack!

When you get back to Castle Oblivion from Hollow Bastion, a member of Organization XIII will be waiting for you. It's Vexen, who, as suspected by Sora, is making Riku evil. There is little conversation before the time for battle comes. Vexen is a tough battle, namely because of his two health bars and his shield, which he constantly has raised. Don't even bother trying to attack directly while he has his shield up. Use the sleight of combined Cloud cards and keep trying to get behind him, since he doesn't seem to be blocking his backside. Vexen's attacks include:

Once you've defeated Vexen, he'll escape and the scene will switch to Organization members Larxene, Axel, and Marluxia having a conversation. The discussion seems to be about Vexen. Once this cutscene is done, go up the stairs to see a new world - Twilight Town.