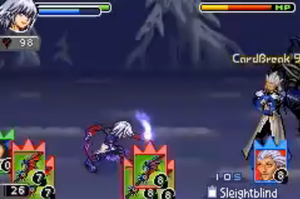 Ansem is as tough a battle as the final boss of Sora's Story, Marluxia, if not even tougher. This battle will be much harder without Dark Mode, so use it and the moves that come with it whenever you please, but be warned; if you let him get an attack in while you're in Dark Mode, you'll transform back into your normal self as quickly as you transformed into your dark self. Avoid his attacks at all cost, whether you're in Dark Mode or not. Ansem has four health bars, so not only is this a tough battle, but a tedious one as well. Dark Firaga has the best effect on Ansem, though the shadow behind him and its protectiveness can get in the way. It will frequently jump out to guard Ansem, making it harder than it would have been without it to get an attack in. Ansem's attacks include: