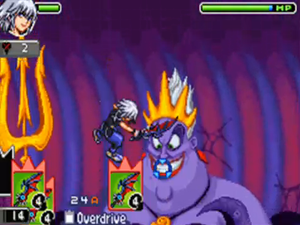 The head is the target.

Ursula, in a mimicking of events from Kingdom Hearts, grows into a much larger version of herself. This boss battle, unlike many of the others, shouldn't be very hard at all. Her attacks aren't very damaging but easy to dodge or card break anyway, and she doesn't move around much either. It'll be easy to stay on top of her by moving around a lot, which she quite obviously isn't capable. Card breaking is a breeze in this battle and even then, dodging also proves quite effective. As long as you're at the right level, which should be somewhere over 25, this boss will be a breath of fresh air. Ursula's attacks include:

Once you defeat her and obtain the card she leaves behind, go back to Room 2 and follow the path up for two rooms. When you reach Room 10, go to the north door and synthesize using a card with a value of 1 or more. Go through the door in Room 11 to return to Castle Oblivion.