When you enter, you'll be greeted by Pinocchio. He and Jiminy Cricket have a little reunion, but it doesn't last long when Pinocchio mentions that he can't find a way out of the whale along with his father, Geppetto. Who else to help but Sora, Donald, and Goofy? When you gain control of Sora, jump up on the ledge and get ready for some Heartless to battle you. Jump up on the circular platform to the right and you'll get a Potion. Attacking the barrel will get you a Kingdom Key and another Heartless battle. When you're done facing the Heartless here, jump on the gray spring and Sora will jump up to the next platform. Break the barrel and then jump back down to the door.

Get through it with synthesis and you'll be attacked by more Heartless. After you're finished dealing with them, go left and climb up the ledge. Jump up the next smaller ledge and then walk to the right to reach a door. You'll get to a room with more ledges and more springs. Go to the door on the right behind the spring for some more Heartless battles and EXP. Then go back to the previous room and jump up the ledges to the highest door. Open the door and you'll find a moogle. After doing what you have to, go to the door on the left side of the moogle. You'll reach a shipwreck and Geppetto.

After some catching up, Sora notices that Pinochio is nowhere to be seen. With no other choice, they set out to look for him. After the cutscene, you'll end up in another area of Monstro's belly. Jump down the ledge and go through the door there, then go to the closed door and open it. Waiting for you there is Pinocchio. After the cutscene, you'll get into a battle with Parasite Cage - with Pinocchio trapped inside. 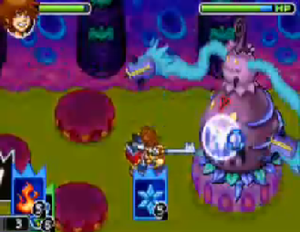 Here you'll be battling Parasite Cage for the sake of Pinocchio. Three platforms will be constantly rotating with a pool of acid beneath them. The acid doesn't just slow you down, breaking any sleights or combos you were in the middle of, but will also do damage to Sora. The HP taken away isn't that big, but this can be a real pain when using sleights and even simple commands. Try your best to navigate the moving platforms and keep from falling into the acid without ceasing the attack on Parasite Cage. Gravity doesn't affect Parasite Cage at all, but Fire can be quite useful in this damage as it stuns Parasite Cage. Its attacks are:

After you're done with Parasite Cage, don't start to relax just yet - the battle isn't over. Walk down a little further and you'll run into another battle. This time you'll be battling a bunch of Shadow Heartless, all until the bar in the corner of the screen fills up. This can be rather time-consuming considering the bar rises so slowly, but be patient and it'll get there. After you escape Monstro, get ready to move on to the next floor.