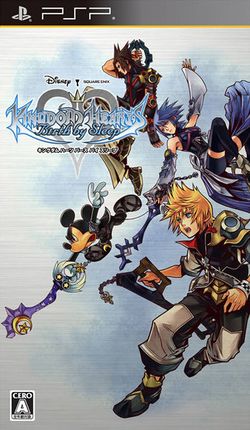 A high definition version of the Final Mix edition was released for the PlayStation 3 in 2014 and PlayStation 4 in 2017 as a part of the Kingdom Hearts HD 2.5 ReMIX collection.

The game is a prequel to the original Kingdom Hearts, taking place ten years before, and features many previously unseen characters and unexplained plot elements from the series. The game centers on the journeys of Terra, Aqua, and Ventus, characters briefly featured in Kingdom Hearts II, in their quest to locate the missing Master Xehanort. The game also utilizes an overhauled battle system different from previous games in the series with new elements such as the Command Board, Command System and Dimension Links added in.

The three main characters are Terra, Aqua and Ventus, a trio of Keyblade apprentices under Master Eraqus, who aspire to become Masters themselves.

In the Land of Departure, Terra and Aqua take an exam to achieve the Mark of Mastery. Master Xehanort manipulates the test so only Aqua passes and Terra fails, lessening Terra's control of the darkness in his heart. Shortly after the test, Xehanort disappears and a horde of mysterious creatures called the Unversed begin to appear throughout the worlds in pursuit of the Princesses of Heart. Learning about these developments from Yen Sid, Master Eraqus sends Terra and Aqua to destroy the Unversed and find Xehanort throughout the countless worlds. Later, Xehanort's apprentice Vanitas convinces Ventus to follow Terra against Eraqus' wishes, while Eraqus orders Aqua to watch over Terra and bring Ventus back to the Land of Departure.