Unversed Missions are introduced in the Final Mix version of the game, in a role similar to that of the Mushroom XIII in Kingdom Hearts II. They can be found across all worlds and act as bonus objectives, in some cases providing special rewards in the form of Illusion Commands. Illusion Commands allow Terra, Ventus, and Aqua to transform into the Unversed that they have defeated in the respective mission, provided they obtain a rank of ★★★.

The enemy here is the Flame Box, an Unversed bearing resemblance to the Spiderchest that launches meteors into the air. These meteors slowly fall down to the ground, doing damage upon contact. The mission here is to destroy thirty of them before they can even hit the ground. Start by locking on whenever the Flame Box launches a meteor. There are many approaches that can be utilized in disposing of the meteors, the simplest being a physical aerial strike. This is also the riskiest strategy, as the chosen character can easily miss. One safe Command to use is Thunder and its more powerful variations, allowing for the Keyblade-wielder to zap all meteors from the ground as long as they're in range. Surge Commands also work well in mid-air, as they allow any character to attack from a distance and take out multiple meteors at once.

In this mission, Terra, Ventus, and Aqua are faced with a swarm of Lone Runner Unversed. They have an appearance similar to the Shoegazers and retain all of the Shoegazer's abilities, of which include stomping around to attack and putting up an impregnable barrier to defend. Since you must defeat thirty of these enemies within only a minute and thirty seconds, make sure to equip Commands that deal heavy damage to a large group of enemies. Mega Flare works incredibly well, as it disposes of large groups even from a distance. If this Command is not available, make sure to move quickly toward the enemies with Surge Commands (such as Barrier Surge for Aqua) or Superglide for Ventus. When playing Terra, the Ventus D-Link can be used as long as he's been leveled once to provide Terra with the Haste ability, significantly speeding up his attacks. For all characters, aside from Mega Flare and Surge Commands, a Magnega and Thundaga combo works well. For Ventus, Salvation can also be used despite its slow startup to immediately defeat all surrounding Lone Runners, and for Aqua, Seeker Mine has the same effect.

This mission is unique in that the area you find yourself trapped in is filled with poison. You must defeat the many Vitality Vials that spawn in order to maintain your health and survive until the clock hits two minutes. Lock on to find the small Unversed that spawn around this area. Though they don't stray too far, they can still be difficult to reach before the Keyblade-wielder's steadily-decreasing HP reaches zero, particularly if that Keyblade-wielder is Terra. In this case, make sure to D-Link with Ventus for his Haste ability and make heavy use of Surge Commands to get around. For Ventus, have Superglide equipped to race toward the Vitality Vials at max speed, and for Aqua, Doubleflight/Air Slide to stay afloat combined with Surge Commands should be sufficient. The Unversed themselves are defeated rather easily, so focus the Command Deck around pure speed.

An alternative, although less challenging option, is to fill the Command Deck with Cure commands and Elixirs. Cast as needed and wait out the clock. Works for all characters. 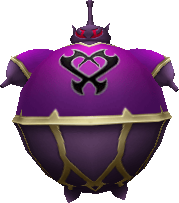 The Belly Balloon fought in this mission is a variation of the Tank Toppler Unversed, with a valve on its back being its weak spot. Attack the valve to decrease its size to minuscule proportions, until it can finally be defeated. This must be accomplished in under a minute, something proven difficult by the Belly Balloon's massive starting size and its tendency to turn and cause the Keyblade-wielder to attack its front mid-combo. Attacking anything other than its valve will lead to the Belly Balloon inflating, in which case you must make up the difference by hitting it back down to size from its valve. For Terra, again, the Ventus D-Link's Haste ability should come in handy here, as Terra's slow speed makes for reaching the back of the Unversed a difficult task otherwise. For Ventus, the Reversal can be equipped to make this much more manageable, which can then be followed up by a Reversal Slash. As Reversal allows Ventus to slide behind his opponent, as long as

is pressed when the Unversed is about to attack, the benefits are clear. Lastly, Aqua's Triple Firaga and Triple Blizzaga have homing properties that can allow her to hit the valve on the Belly Balloon's back without even getting close.

The Ringer Unversed fought here looks similar to Red Hot Chilis, Blue Sea Salts, Yellow Mustards, and Prize Pods, but has a very different gimmick. Forty of them must be defeated within the two minute time limit, though this is easier said than done. To start off, before it can even be attacked, the Ringer creates multiple copies of itself and proceeds to surround itself with them. It then shuffles positions with its copies, after which you must identify which Ringer is the original and attack it. Failure to catch the correct Ringer results in a time deduction of five seconds, while success destroys not only the original Ringer, but all of its copies as well, bringing up your score a good amount. As the rounds go on, the number of copies created will increase, making this task more difficult. Unfortunately, there is no cheap strategy to defeating this irritating Unversed. You must simply watch the original closely as it flies across the screen, or pause periodically if you're having trouble following it.

This mission is simple: defeat all 300 Jellyshades within 30 seconds. It should be familiar as the final round of the tournament in Terra's and Aqua's stories, now with increased difficulty. To counter this, you should have some powerful crowd-clearing Commands by now such as Mega Flare and Thundaga. Magnega is also as useful as ever, forcing the weak Jellyshades together so that Terra, Ventus, and Aqua can perform Finishers or other powerful attacks (such as Meteor for Terra, Salvation for Ventus, and Ice Barrage for Aqua) and rid the area of large groups as quickly as possible. As always, the Haste ability provided by the Ventus D-Link should be useful for Terra. 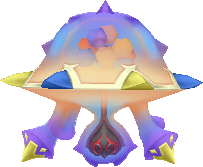 This mission plays just like the Struggle minigame in Kingdom Hearts II, requiring you to collect ninety orbs within two minutes. Just like Struggle, these orbs are collected by hitting the enemy, in this case the Gluttonous Goo Unversed. The stronger the attack dealt against the Gluttonous Goo, the more orbs it will drop. The Treasure Magnet ability can aid you in collecting the orbs, allowing you to focus solely on attacking. For all characters, make sure to have their most powerful attacks equipped in order to get as many orbs out of it during offense as possible. When the Gluttonous Goo begins to attack, Guard and follow it up with a Reprisal attack (Counter Hammer for Terra, Counter Rush for Ventus, and Counter Blast for Aqua) to avoid damage and get a good amount of orbs out of it.

This is another point-based mission. Rather than defeating the Unversed, you must claim 70 points from it within one minute and thirty seconds. This is done by attacking the center section of the Element Cluster with a corresponding Magic attack; Fire for red, Blizzard for blue, and Thunder for yellow. Equip Fire Surge and Thunder Surge for speedy elemental attacks, and replace all neutral Action Commands with elemental ones. Ice Slide can be used by all characters as a variation of Air Slide. Thunder Roll and Fire Glide can be used by Ventus, while Firewheel can be used by Aqua. Elemental Shotlocks, such as Flame Salvo, Absolute Zero, and Thunderstorm, can also be utilized. When entering an element-specific Command Style such as Firestorm, Diamond Dust, or Thunderbolt, make sure to use Keyblade attacks only when the Element Cluster matches that element. Otherwise, focus on Magic and Surge Commands.

In this mission, points are collected by keeping the three Floating Flora Unversed in the air. They can be kept in the air with attacks, the most simple strategy here being the use of Shotlocks with high lock-on counts such as Meteor Shower or Chaos Snake. As always, Surge Commands work well for all characters here. Thundaga is also useful for its ability to attack all surrounding enemies from wherever the Keyblade-wielder stands. For Ventus, Time Splicer and Faith should be equipped, and for Aqua, Time Splicer and Magic Hour. Terra lacks a good variety of mid-air attacks, so his best bet is a Deck full of Surges (Thunder Surge in particular).