Ventus is the first to arrive at the Dwarf Woodlands, coming across the seven dwarfs in his search for Terra. Before following them, pick up some treasures in the area; across the upper ledge Ventus starts out on is a Potion and his first encounter with the Unversed, down below is another Potion on the south end of the area and an Ether on the north end, by the entrance to the Mine. Enter for a scene, then delve deeper into the Mine to begin a minigame. 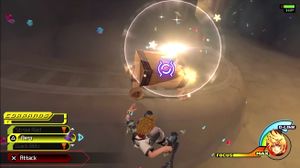 Attack the cart from outside of its path to avoid taking a hit.

This minigame has Ventus running around the Mine looking for each of the seven dwarfs (exempting Dopey, who remains at the Entrance). Some may be in plain sight but others may be hiding under objects. Before beginning the search, climb up the ledges up ahead for Mini. Drop off to the left to find some more Floods, and the first dwarf past them: Bashful, riding in a mine cart. He travels across two railways separated by inaccessible tunnels. Attack the cart from the side or behind, making sure to stay out of its path to avoid damage, to eventually destroy it and successfully find the first dwarf. Among crates to the left, another dwarf hides. Destroy all crates until only the dwarf's remains, though he will dash away every time Ventus attacks him. The exception to this is Strike Raid, which Ventus can use while the dwarf is stationary to deal some hits on the crate without scaring the dwarf off. Destroy the crate to find Happy. Continue down the path to find Doc in a crate to the right. Payback Raid and Sleepy (who doesn't even attempt to escape) are to the left. Open the chest at the end of the path for a Panacea and destroy the crates here to find the remaining dwarfs, Sneezy (who leaps in the air) and Grumpy (who attacks upon contact).

After finding the seven dwarfs and getting kicked out of the Mine, exit back to the Mountain Trail. On the south end of the area past the chest is an exit to the Cottage Clearing. Behind the Cottage is a Map and Fire, and follow the stream to the left for Poison. Inside the Cottage is an Attack Recipe. Exit to the Deep Woods. 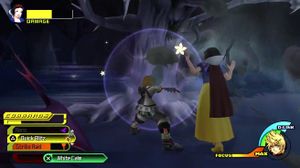 Guard against the trees when prompted to deal with them quickly.

Open the chests in the clearing for an Ether and a Potion, and one down the path for a Shimmering Crystal. Approach Snow White to begin the minigame in which Ventus must escort Snow White though the Woods, protecting her from Unversed. As in all other escort missions in the game, the amount of damage Snow White has taken is shown in a bar at the top of the screen.

This escort mission is a bit different from others in that Unversed aren't the only enemies that Ventus must contend with. The trees in the area will come to life when Snow White approaches them, attacking maliciously. Since the trees have much greater health than any of the Unversed at this level, the best defense against these enemies is to press

when prompted (usually within a reasonable distance of Snow White, if she is attacked) and then

After successfully escorting Snow White to the Cottage owned by the dwarfs, Ventus is once again accused of being a thief. Head back into the Deep Woods to begin a boss fight. 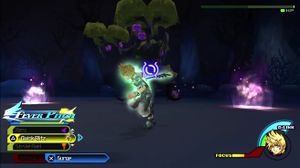 Dodge Roll when the Treant jumps to avoid Poison and a shockwave.

The Mad Treant is pretty tough for an early boss fight, so prepare accordingly. It has an array of attacks that allow it to handle close combat and ranged battles, swinging a trunk at Ventus or hopping in place to create a shockwave if close and spewing magic in all directions if far. Try to maintain an aerial offense, as most of the Treant's attacks are ground-based. Dodge Roll away if the Treant jumps, as its shockwave will also send a few Poison blobs to the ground, surrounding it. Counterattack afterward with aerial combos, making use of the Command Style if possible. If you didn't bring any Potions into battle and are looking to heal, D-Link with Aqua for her Cura spell; Thunder can also be used mid-jump to stun it.

After defeating the Treant, for which Ventus obtains an extra Command Deck slot and a new Fire-based Command Style, view the world's final scene to receive the Treasure Trove Keyblade and forge a D-Link with Snow White.

Land in the Cottage Clearing and exit to the Deep Woods. From here, exit to the Flower Glade. Across the bridge is a chest containing a Soothing Crystal.