Aqua begins the world in front of Maleficent's Castle, which she decides to investigate. 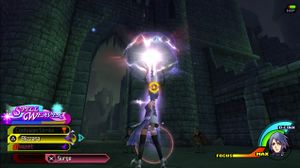 Aqua's Magic is a handy tool against Maleficent's goons.

Before going down the path, open a chest behind Aqua for a Hi-Potion. Enter the castle to be introduced to the primary enemy of this world, fought throughout the castle: not Unversed, but Maleficent's goons. While they're relatively weak, they find strength in numbers, and will usually attempt to gang up on Aqua by stunning her with arrows from afar, giving the spear and mace-wielding goons the opportunity to combo. Magic such as Magnet or Bind do wonders against them, severely restricting their movement and allowing Aqua to destroy them in droves. They are also weak against all elemental Magic, so make sure to have Fire, Blizzard, or Thunder attacks equipped to defeat them faster. To the left of this area is a ledge that Aqua can reach by jumping onto some crumbling stairs; open the chest here for Sleep. Back on the ground, follow the path until you reach a short staircase. Open the chest to the left of it for Cure, which should be equipped especially on higher difficulties, then continue up the stairs and to Maleficent's Throne for a scene. Afterward, Aqua finds herself in the Dungeon Cell with Prince Phillip. 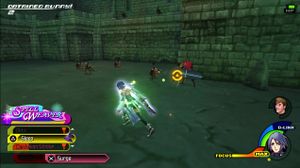 Prince Phillip isn't a very reliable ally, but he makes for a good distraction.

Open the sole chest here for a Map. Exit to find more of Maleficent's goons down a narrow hallway, and then in an open space. Take the stairs up here for an exit and another scene, after which Aqua is thrust into battle against a horde of goons. Prince Phillip acts as a party member here, though he can't be relied upon and actually gets knocked out quite often; his best use is to serve as a temporary distraction while Aqua initiates some of her slower attacks. After the battle, take the nearby exit to the Dungeon. Though she would ordinarily need Air Slide, Aqua can use a jump followed by a Sliding Dash to reach the ledge up ahead, holding Ice Barrage. Backtrack and head right this time, hopping to another ledge holding a Hi-Potion and leading into a downward stairwell. Follow it to the Hall, then take the exit across the large room to find yourself back at Maleficent's Throne. Open a chest by the throne itself to find Confusion Strike. The exit on the other side of the room leads to the Gates. 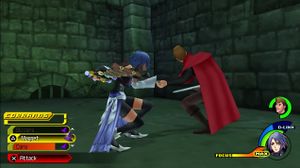 Approach Prince Phillip when he calls Aqua over to begin a simple QTE.

Aqua and Prince Phillip have been locked in the castle by tall gates, which can be controlled only by levers on the second floor of the area. Fortunately, Aqua can now reach higher ground with the aid of Prince Phillip. After defeating the goons on the ground floor, Phillip will call Aqua over by the wall. Press

and Aqua will take his hand to be boosted up to the second floor; pressing

afterward causes Aqua to smash part of the ledge, making it reachable with a couple of jumps. Defeat the goons up here and open the chest for a Wellspring Crystal, then hit the lever at the very end of the path to open the gate. In the next area, do the same to reach a short, winding staircase leading to a Pulsing Crystal and the Absolute Zero Shotlock. Right by this platform is the next switch. Hitting it will trigger a scene in which Aqua and Prince Phillip finally escape the castle, for which Aqua receives High Jump. Equip it immediately before commencing the descent, where Unversed will finally be fought again.

Past the many Unversed is the Waterside, where Aqua can open a chest that should be visible as soon as she enters for an Ether. Further down the path is another chest on a high ledge, containing a Balloon Letter. The last chest in the area is by the exit and contains a Potion. In the Forest Clearing, open the chest to the left for a Hi-Potion and prepare for a boss fight. 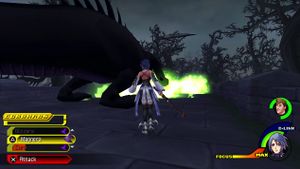 If ever Aqua needs a reprieve, she can stand to the dragon's side and let Phillip distract her.

This battle is unique for a good number of reasons, the first being the limited space of the arena. Maleficent's new form takes up a good portion of the bridge, and the area is otherwise surrounded by thorns. However, Aqua is able to attack Maleficent's back by maneuvering through the narrow space between her and the bridge wall. If ever she feels the need to escape Maleficent's attacks, most of which come from the dragon's front, she can simply stand beside her and attack her from there. The other way in which this battle is unique is that Aqua again has the aid of Prince Phillip as a party member. Phillip not only distracts Maleficent, allowing Aqua to Cure and perform Magic attacks from a distance, but he also gives her access to a new combination attack. 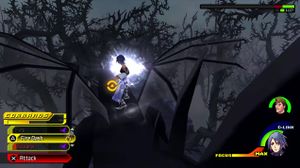 Approach Phillip when Maleficent flies into the air to be launched onto her back.

As for Maleficent's offense, it mostly consists of creating shockwaves by slamming her front feet on the ground (jump when she lifts her body in preparation) and breathing green flames that remain on the battlefield (cartwheel behind her, where the flames can't reach Aqua), all of which should be familiar from the fight against her in the first Kingdom Hearts. However, Prince Phillip adds a new defensive option as a party member, calling Aqua over before the dragon can begin breathing its flames down onto the duo. Hide behind the prince, who staves off the flames with his shield, until the attack concludes, in which case a combination attack becomes available. Press

to get a boost from Prince Phillip into the air, and then

for Aqua to slam her Keyblade down on the dragon on her way to the ground. This attack can also be performed when Maleficent takes off, flying out of reach of the ground-bound duo. Attack the dragon freely once on her back, as she cannot counterattack and will simply fall to the ground once she's had enough.

Defeat Maleficent for the Firestorm Command Style and some scenes, after which Aqua obtains the Fairy Stars Keyblade and Xehanort's Report 6.