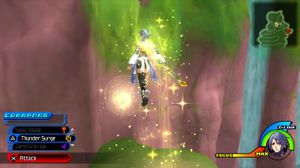 Hop on the pixie dust to launch Aqua to the top of Rainbow Falls.

Exit and open the chest by the save point in the next area for a Map. Across the shallow water is a Mega-Potion. In the next area, the Jungle Clearing, is a Hi-Potion by some brush and this world's first instance of Unversed. Enter the tree in the center to find Peter's Hideout, where Mine Shield and an Elixir can be found in a nook. Exit back to the Jungle Clearing and take the exit by the chest. After the scene, the group is bombarded by cannon fire from Captain Hook's ship. Swim across the water to an island holding an Elixir and another within a cave holding Firaga Burst. Back on land, take the exit opposite where you came to find the Seacoast. Directly to the right after entering is a Hi-Potion. Follow the path to the other end of the area to find an Ether and an exit to Rainbow Falls: Base for a scene. Open the chests here for a Panacea and a Fleeting Crystal before launching Aqua to higher ground by hopping on the pixie dust and entering the next area.

Hop on the pixie dust to the right upon entering to find Firaga and continue forward along the waterfall for a Sticker and Time Splicer. Back at the start of the area, take the low path toward the other end of the area to find a Chaos Crystal and Thundaga. Follow the pixie dust up from here to reach the exit. In the next area, open the chest for a Mega-Ether before continuing forward and triggering a scene, after which Aqua obtains Doubleflight. Equip it and exit to the Indian Camp for a boss fight. 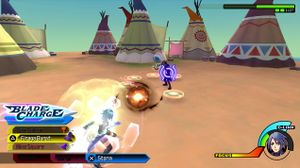 Just as in the previous battle with Vanitas, drop Mines and Guard heavily.

Aqua has access to D-Links, Command Styles, and Shotlocks in this battle, and they should be used if possible to gain the upper hand in battle.

Aqua should go on the offensive while also following a hit-and-run strategy, using magical attacks as their primary source of dealing damage. Vanitas may disappear during the battle, so Aqua should immediately Cartwheel, or instead will fall victim to his downward strike. The boss may also shoot a single, large fireball at Aqua that will soon separate into three smaller, homing fireballs after traveling forward in the Aqua's direction. Cartwheel again can be used to avoid this attack. If Vanitas leaps into the air, he may strike Aqua with a dark lightning attack, which has a relatively long range. Cartwheel is recommended in terms of avoiding it. Vanitas may proceed to sink into the ground, visible only as a pool of darkness that will move to Aqua's location. Unless Aqua Cartwheels away, she will be hit by several fireballs. Lastly, Vanitas may perform a simple two-hit physical combo which now adds a homing, blue, crescent-shaped wave of energy, an attack easily dodged with Cartwheel. In terms of offensive tactics, Seeker Mine and Raging Storm are highly recommended for use, as they will deal great damage to the boss, also interrupting his attacks. Whatever physical attacks Aqua attempts should be the most powerful in her arsenal.

For defeating Vanitas, Aqua obtains the Ghost Drive Command Style, which lets her teleport after enemies at high speed. After the scene, she forges a D-Link with Peter Pan and obtains the Pixie Petal Keyblade. After another scene, she obtains the Stormfall Keyblade. Aqua can now visit the Mysterious Tower.