Terra's first world also marks the beginning of his fate. Something happens here that shapes Ventus' and Aqua's stories later on...... 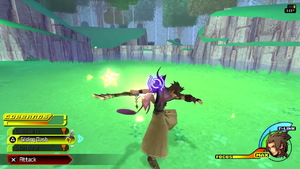 The Floods are colored differently in the Final Mix version of the game, but can still be defeated in one combo.

After the cutscene in which he arrives, Terra will face his first real battle. From here on, it's game over if you lose. There will be four types of Unversed encountered in this battle: Floods, Bruisers, Scrappers, and Red Hot Chillis.

The small Unversed, the Floods, sink into the ground if not attacked quickly. They will always appear behind the player in horribly planned sneak attacks. Look for the moving blue (or purple in Final Mix) dots in the ground to determine where the Floods will pop up and destroy them on sight. They cause minimal damage singularly, but if you're low on HP, don't rush into a whole pack of them.

The Scrappers are defensive Unversed that will wait for you to make the first move. Do so. If you wait too long, the Scrappers will rush in and attack Terra with their claws. If a pack of them bum-rush you, evade immediately. Look for body movements. If a Scrapper moves its body or arms, it's about to attack. If they remain still, pummel them into the ground. Note that using Guard is a good tactic if evasion is impossible. 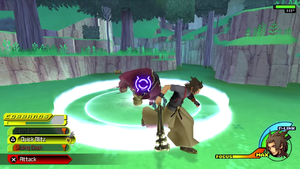 Bruisers unleash shockwaves if not stunned in time.

Red Hot Chillis are agile Unversed that are hard to hit. They tend to stay in the air, firing Fire spells from their lids. Terra will have to get up close and personal with these guys. Luckily, they have little to no defensive capability, so they can be destroyed with a single combo. Using certain commands will cause them to fall to the ground, creating an opening to attack.

Bruisers are the epitomes of strength. They do not flinch when damaged with normal combos, making them hard enemies to contend with. They can charge straight at you, jump into the air to create a massive shockwave, and even bounce at you from a distance. All of their attacks can be countered with Guard, which will instantly stun them for a time. The only way to truly defeat a Bruiser is to use hit-and-run tactics, attacking once or twice and then running away to avoid damage. Magic works wonders against these guys, since the player doesn't even have to be next to them to damage them.

Open the chest after the battle for a Potion. 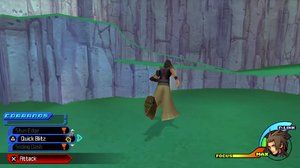 Before continuing forward, turn around to find a chest atop these ledges.

Before Terra resumes the pursuit, the player should have him go further down the original path for a treasure chest containing a Pulsing Crystal. Don't worry about the green Fire-like barrier. That area will never be accessible to Terra anyway. Once the player has the chest, they should pursue the Flood into an area containing the game's first Sticker. Stickers are optional items spread throughout the Worlds. When the player collects one, they should pause the game and go into their Reports. Once there, they should find the Sticker in their Sticker Collection and stick it onto the picture shown to earn points. If you collect enough Stickers and get enough points, you'll get items or Commands as Rewards. Most Stickers are in plain sight, but you'll have to return to these worlds late in the game once you have more abilities to find the harder-to-reach ones. A chest to the left contains the Blizzard command.

Once ready, the player should proceed further onto the Castle Bridge, where the next cutscene will take place. 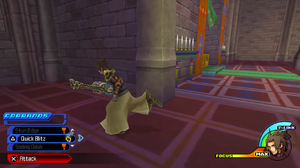 Chests are hidden across the Audience Chamber.

While running throughout the various worlds, the player will be attacked by Unversed at any given moment, though in most situations they have a choice between fighting or fleeing. Fighting the Unversed is the best way to level up your character, their Abilities, and their Deck Commands. However, the choice is yours.

There are treasure chests littered around the Castle's Audience Chamber; right of the entrance is Zero Gravity, by a staircase to the right is an Ether, and a Potion to the left of the thrones. There are also Unversed here. Claim the treasure chests and do what you must. Ignore the Sticker hovering over the throne for now; Terra doesn't have the proper ability to reach it yet. Continue up the stairs, proceeding down the corridor. There is a treasure chest containing an Ether hidden behind a corner at the fork in the hallway. Don't miss it. Walk up to the glowing door and examine it for another cutscene. After this cutscene, Terra receives a Map and the ability to use Maleficent as a D-Link.

Before roaming the castle again, you should return to Aurora's room and enter the small cavern by the save point. Here will be a couple of treasure chests containing Sleep and Attack Recipe as well as a Sticker. Save your game, and if you've unlocked or received any magic spells, equip one or two. You'll know why in a minute.

Return to the Audience Chamber and prepare to fight Terra's first boss. 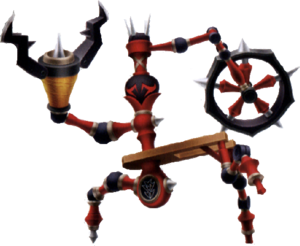 The Wheel Master will immediately begin the fight by trying to tangle Terra up in its thread. If it manages to catch him, it will drag him closer for continual damage. Repeatedly press

to break free. Once free, attack the Wheel Master with all you have. Don't go crazy, however. The Master has a few tricks up its sleeve that can be annoying if unprepared. The Master will slash at Terra with its two arms if he gets too close. If he's too far, the Master will jump into the air and home in on Terra, creating huge shockwaves upon landing, jumping a total of three times. It can also fool you into thinking that its going to tangle you, only to throw its wheel at you instead. Stay away from that wheel, because the moment it hits the ground, The Master will jump towards Terra for a shockwave attack, regaining its wheel in the process. 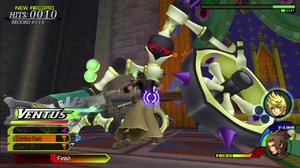 The Wheel Master can be stunned for HP.

The proper way to win this fight is knowing when to attack and when to evade. After the Master attacks, there's a few-second delay that gives Terra an opening. Either use Attack Commands or Magic Spells to deal damage. If you use Attack Commands, Terra will enter his Critical Impact Command Style, which can be a boon in this fight. Note that Terra can destroy the spindle and wheel, decreasing the number of attacks this boss can use. If this is done, the boss will enter a brief stunned state, in which HP Orbs will fall to the ground, replenishing much-needed HP. 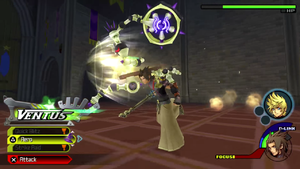 Maintain a distance when the Wheel Master charges.

Once its HP is low, it will use another attack. It will charge up on its hind legs and rush at Terra. Use the Slide Command to stay ahead of this attack.

If you know when to attack and when to run, this battle should not be too much trouble. Your reward will be an increase in Deck Capacity. If playing in Critical Mode, there is no Reward, for an extra Command slot is already given upon starting the game.

Terra receives the Three Stars Keychain upon completing this world. While it doesn't increase Strength, it does make Terra's Magic a bit stronger.