Upon arrival, Ventus meets the self-proclaimed Captain Justice, who is quite clearly Pete disguised as a caped crusader. After a short conversation, the pair discover trouble brewing in Disney Town: a broken ice cream machine. 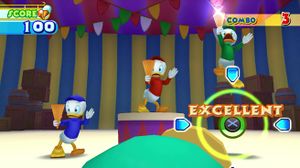 Open a chest by a wall to the right for a Map and one to the left for a Potion before speaking to Minnie. Doing so triggers a minigame introduced in Ventus's story: Ice Cream Beat. As can be deduced from the name, this is a rhythm game involving ice cream. Press

to the beat of the song, emphasized by Huey, Dewey, and Louie's claps, and press

to aim the ice cream at the proper duck. This can take a bit of practice, as the score required to clear this doesn't leave much margin for error. If it helps, ignore the circle closing in on the button prompt and simply follow the tune of the song; this should give you more Excellent ratings than Good. A Poor grade will result in the duck dropping ice cream, and since score is dependent on the height of the ice cream, avoid Poor grades as much as possible. When the duck in the center begins to dash in place, this is your cue to press

as rapidly as possible, drastically increasing your score. Earn a Fantastic rating to clear the world. 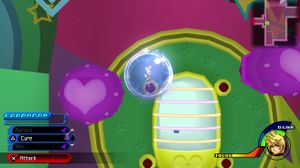 Get to Pete's Rec Room through the Gizmo Gallery underground, and from here exit to the Raceway.

While the world's story is done, there's still much to do in the way of completion. Examine the manhole cover in the Main Plaza to go underground. Open a chest up ahead for Thunder and after defeating the Unversed that spawn (including the deceiving Spiderchest), continue down the path to find another chest containing Thunder and a machine. This machine must be stricken with consecutive Thunder attacks in order to power on, getting the machinery in the area moving and allowing Ventus access to a higher level. If you do not have enough Thunder-based attacks, an easy alternative is to enter the Thunderbolt Command Style, which can activate the machine in a single combo. Ride the Mickey Mouse-shaped elevator and drop off to the left for a Mega-Potion. To the right is a pair of gears that lead to a hand, which can drop Ventus off to a fork. Follow the hands to the right for a Sticker and some chests containing a Mega-Potion and a Chaos Crystal, and follow the path to the left for a Mega-Ether and the exit. The next area is Pete's Rec Room, which is in essence a giant pinball machine. A Panacea and an Action Recipe is in the top left, Aerial Slam is in the top right, a Wellspring Crystal is in the center in front of an exit to the Raceway, and Break Time is behind some bars that can be removed by hitting four crown bumpers. From here, exit to the Raceway.

Open a chest right after entering the area for Slot Edge. You should see another rooftop across the path holding a chest which contains Superglide, though you'll need Glide or a High Jump followed by two Sliding Dashes to access it (Fire Dash is also sufficient). With Superglide, you can access a Sticker right by a building across from this rooftop. Once done with the rooftops, drop down to the highest level of the lower ground to find Reversal Slash. Drop down another level and pick up a Shimmering Crystal by the stairs. Down on the ground under the bridge is the last treasure, Stop.

Before moving on, Ventus can complete the Ice Cream Beat mini-game by returning to the Main Plaza and speaking to one of Donald's nephews, or he can try one of the other mini-games: Rumble Racing by speaking to the chipmunks at Raceway Registration, or Fruitball by speaking to Horace Horsecollar at the Fruitball Court.