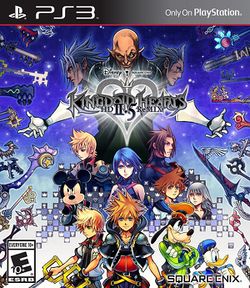 Kingdom Hearts HD 2.5 ReMIX is an HD remastered collection of three games in Square Enix's Kingdom Hearts series: Kingdom Hearts II, Birth by Sleep, and Re:coded. A successor to the series' HD 1.5 ReMIX collection, it was released as a PlayStation 3 exclusive in Japan on October 2014 and internationally two months later.

As with HD 1.5 Remix, the collection was developed mainly by the Square Enix 1st Production Department in Osaka, along with some help from Square Enix's Tokyo team.

The backgrounds and textures of the game had to be adjusted in order to change from the game's original 4:3 ratio to the HD 16:9. Additional imagery was added to the menu screens and Gummi Ship area to compensate for areas that were lacking from the ratio shift. According to co-director Tai Yasue, approximately 80% of the original audio was remixed, as well as additional orchestral elements added to the songs. Yasue said, "Yoko Shimomura's music is an undeniable trait of the Kingdom Hearts series, I feel like without the atmosphere she creates, it isn't Kingdom Hearts, so the mix of the final audio was carefully controlled but also provides a new depth to the familiar sound." Kingdom Hearts II Final Mix was released outside of Japan for the first time as part of the collection.

Birth by Sleep is a prequel to the original Kingdom Hearts, taking place ten years before the title's events. The game centers on the journeys of Terra, Aqua, and Ventus, characters briefly featured in Kingdom Hearts II, and their quest to both locate the missing Master Xehanort and protect the worlds from creatures known as the Unversed.

Moving from the PlayStation Portable to the PlayStation 3 allowed the development team to add more details to the character designs, additional atmospheric sounds, as well as slightly tweak the gameplay system, now allowing camera control with the right analog stick. In addition, the Mirage Arena (a multiplayer component from the original game) has been reworked to only be a single-player experience. Yasue said enemy strengths and AI in the arena were adjusted to account for this. The inclusion of the Final Mix version in the collection marked the first time this version was released outside of Japan.

Kingdom Hearts Re:coded was also included in the collection, featuring the Nintendo DS game adapted into a cinematic retelling, similarly to how Kingdom Hearts 358/2 Days was included in Kingdom Hearts HD 1.5 Remix. The title is set after Kingdom Hearts II and follows the discovery of Jiminy Cricket's journal, which chronicles Sora's fight against the Heartless and Organization XIII, which is found to have two secret messages written by persons unknown. Once the journal is digitized for further analysis, the contents become corrupted. This leads King Mickey and his friends to make a digital Sora to enter and repair the journal so that the meaning of the hidden messages can be deciphered.

For the Re:coded cinematics, additional events occur that were not seen in the original. Tetsuya Nomura added that new voice acting was recorded, and hinted at the inclusion of a new battle scene and a scene that ties Re:coded and Kingdom Hearts 3D: Dream Drop Distance together. Yasue revealed that approximately 2 hours of the total 3 hour cinematic is newly created content and subsequently recorded with voice acting, as well as featuring additional scenes that flesh out the backstories of other Kingdom Hearts titles.