Thomas the Tank Engine and Friends 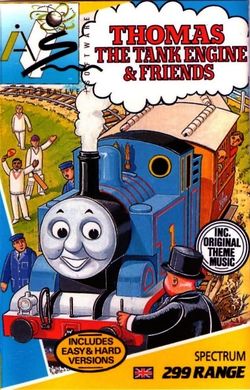 Thomas the Tank Engine and Friends is an action game, that was developed by Enigma Variations for Alternative Software and released upon the Sinclair ZX Spectrum, Amstrad CPC and Commodore 64 in 1990; it is based on the British children's television series of the same name, itself an adaptation of The Railway Series books by the Reverend W. V. Awdry (1911-1997), and was later redeveloped for the Commodore Amiga, Atari ST and MS-DOS by PeakStar Software in 1992. The 8-bit versions are infamous for being impossible to complete on "normal" difficulty due to the placement of rocks on the tracks being randomly-generated, Thomas' so-called "friends" whom, in the '90 versions, were limited to Duck and Diesel appearing at varying points, and Thomas himself derailing if he tries to turn a corner at a high speed - and going back two screens each time he got "repaired" did not help.

It's full steam ahead once again for Thomas. He's had a busy week at
the Station and now it looks likely this week is going to be just as
busy. The Fat Controller's head is spinning with all the special trips
he has to organise. It is a good job that he has Thomas and his
friends to rely upon. He calls Thomas over:
"Now Thomas," he says, "I have selected some very important jobs for
you to do this week. I know that you will do your best and that you
will be very careful."
"Oh yes, sir," says Thomas. "You know you can trust me. I want to be a
really useful engine."
"These are the jobs you must do," the Fat Controller replies. "Take
the children to the seaside, take a tractor over to the station by the
broken bridge, take some medicine to the hospital, deliver some logs
to the sawmill and coal to the power station, deliver the mail and
finally take some oil over to the oil refinery. Now there is a lot to
do so do not waste time. You can do the jobs in any order but each one
must be finished before the sun goes down."
"All right, sir. I had better get started," says Thomas as he hurries
over to the turntable.
© Britt Allcroft Limited 1990