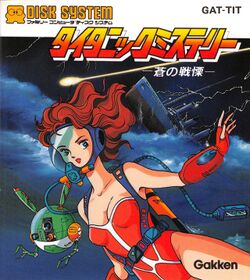 Titanic Mystery (タイタニックミステリー ―蒼の戦慄―, Taitanikku Misuteri Ao no Senritsu?, lit. Titanic Mystery: Shiver of Blue) is an underwater exploration game developed by Activision and published by Gakken in 1987 for the Family Computer Disk System. It has a female protagonist that the player controls while searching sunken ships.

The game is slightly famous for its instruction booklet which contains a short manga-style story. Despite the fact that most Famicom users at this time were children, this manga story features the protagonist in a shower scene. The game was never released outside of Japan, nor was it ever translated from Japanese.