Tower of Babel/Table of Contents

For the Namco puzzle game for the Famicom, Game Boy Color, and Sharp X68000, see Babel no Tou.

Tower Of Babel is a computer game for the Commodore Amiga, Atari ST and Acorn Archimedes systems programmed by Pete Cooke, developed by Rainbird Software and released by MicroProse Software in 1989. It is a puzzle game played on a three-dimensional tower-like grid viewed in vector graphics with filled polygons.

The plot of the game is based on the biblical story of the "Tower Of Babel". At the height of the tower's construction, while it failed in its original purpose to directly contact god, it caught the attention of a passing Zantorian alien spaceship. The Zantorians descended and left three spider-like robots to help the Shinarians in constructing the tower. However, distrust broke out among the two species, and the humans betrayed the robots, stealing their energy packs (called "Klondikes"). Playing the robots, it is your job to find the energy packs to be able to get back home to Zantor.

Tower of Babel/Table of Contents 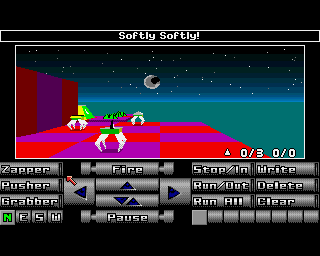 The actual game play is purely puzzle-based. The Tower Of Babel itself does not actually appear, instead you can play over literally hundreds of differently-configured 8*8*4 towers (four floors of 8*8 squares each).

The Zantorians robots are called the Grabber, the Pusher and the Zapper. Each of these has different abilities. The Grabber can collect Klondikes and operate various devices, the Pusher can push things further away, and the Zapper can destroy things. In a tower, you can be assigned any combination of these robots, depending on the tower's design. Towers with Klondikes to collect need the Grabber, but the other robots can sometimes be superfluous.

Everything in the game is viewed in a realistic 3D vector graphics view, but the actual movement in the game is far more contained than in games usually associated with such graphics, only allowing square-by-square movement in rectangular directions and vertical movement using special lifts.

To make matters more interesting, various devices, sentry mechanisms and autonomous robots also inhabit each tower. Some of these can be used to your advantage, while some hinder your progress.

Tower Of Babel also includes a construction kit where you can design your own towers to your heart's content and save them to disk for later play and distribution. The towers can be password-protected to avoid spoiling them by looking directly at the design.

A great feature of the game is the ability to program the robots. Each robot can be given up to eight orders (for example: Forward, Forward, Left, Fire, Right, Forward). In some levels, programming the robots is mandatory, as they need to coordinate their actions in order to solve the level. Watching the robots solve a given level automatically after being programmed is very satisfying.

Block
Can be pushed around but cannot be shot.
Converter
Changes laser beams into pushing beams and vice versa.
Exchanger
When activated by the Grabber, switches places with it and vanishes. Deflects laser beams back to their source.
Flag
Does nothing but fly in the wind and get in the way. Its only use is to be destroyed.
Force up/down
When activated by the Grabber, moves all lifts not currently holding something either up or down.
Freezer
When activated by the Grabber, temporarily freezes everything in the tower except your robots and the lifts.
Glass block
Can be pushed around. Shooting at it deflects the laser beam back to its source, destroying whoever shot at it.
Hopper
Hops around in a random fashion. Can be destroyed by shooting it.
Klondike
The robots' energy pack. Can be collected by the Grabber.
Lizard
Constantly moves in a straight line. When changing direction, eats away a floor tile. Cannot be shot.
Mine
When it is pushed next to an object, or an object is pushed next to it, it explodes, destroying everything it touches.
Prism
Deflects laser beams at a 90° angle. Can be pushed.
Pushing cannon
Constantly fires a pushing beam. Comes in two varieties, fixed and rotating. Cannot be shot.
Time bomb
When the timer reaches zero, it explodes, destroying everything it touches. Can be pushed.
Watcher
Moves around in a random fashion. Cannot be shot.
Wiper
When activated by the Grabber, eats away all floor tiles in a cross-shaped pattern with itself at the centre.
Worm
Constantly moves in a straight line. Shooting at it makes it reverse direction.
Zapping cannon
Constantly fires a lethal laser beam. Comes in two varieties, fixed and rotating. Can be destroyed by shooting it.