The Acorn Archimedes was Acorn Computers' first general-purpose home computer based on their own 32-bit ARM architecture RISC CPU. The name is also commonly used to describe computers which were based on the same architecture, even where Acorn did not include 'Archimedes' in the official name. 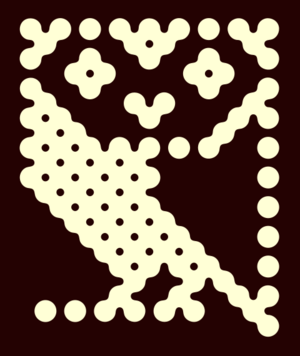 The BBC Computer Literacy Project 'Owl' appeared on the keyboard, above the function keys on the Archimedes 300 series and A3000 keyboards.

The first models were released in June 1987, as the 300 and 400 series. The 400 series included 4 expansion slots (although a 2 slot backplane could be added to the 300 series as an official upgrade, and third parties produced their own 4 slot backplanes) and an ST506 controller for an internal hard drive. Both models included the Arthur OS (later called RISC OS), BBC BASIC and an emulator for Acorn's earlier BBC Micro, and were mounted in two-part cases with a small central unit, monitor on top, and a separate keyboard and three-button mouse. All models featured on-board 8 channel stereo sound and were capable of displaying 256 colours on screen.

Four models were initially released with different amounts of memory, the A305, A310, A410 and A440. The 300 and 400 were followed by a number of machines with minor changes and upgrades:

Work began on a successor to the Arthur operating system, initially named Arthur 2, but with the release of the Hollywood movie of the same name it was renamed to RISC OS 2. A number of new machines were introduced along with it, and in May 1989 the 300 series was phased out in favour of the new Acorn A3000 (the 400 series was kept in production). The earlier models could be upgraded to RISC OS 2 by replacing the ROM chips containing the operating system.

The A3000 used an 8 MHz ARM2 and was supplied with 1 MB of RAM. Unlike the previous models, the A3000 came in a single-part case similar to the Amiga 500 and Atari ST computers, with the keyboard integrated in the base unit. This kind of housing consumes a lot of desktop space, a problem that Acorn tried to overcome by offering a monitor stand that attached to the base unit. The new model only sported a single expansion slot, which was physically different from that of the earlier models, although electrically similar.

In 1991, the A5000 was launched. It featured the new 25 MHz ARM3 processor, 2 or 4 MB of RAM, either a 40 MB or an 80 MB hard drive and a more conventional two-part case. Its enhanced video capabilities allowed the A5000 to comfortably display VGA resolutions of up to 800×600 pixels. It was the first Archimedes to feature a High Density capable floppy disc drive as standard. This supported various formats including MS-DOS and Atari discs. A later version of the A5000 featured a 33 MHz ARM3, 4 or 8 MB of RAM, an 80 or 120 MB hard drive and a revised OS (RISC OS 3.10).

The A5000 ran the new 3.0 version of RISC OS 3.0. As previously, earlier machines were capable of being upgraded to the new RISC OS 3, though some needed help[1], as well as the ARM3 CPU[2]. Earlier models could also benefit from the video performance of the A5000 via a third party upgrade[3].

New range and a laptop[edit]

In 1992, a new range was produced, using the ARM250 microprocessor, an ARM2 processor with integrated memory and video controllers, performing better thanks to an increase in clock frequency, and running RISC OS 3.10. The A30x0 series had a one-piece design, similar to the A3000 but far smaller, while the A4000 looked like a slightly slimmer A5000. The A3010 model was intended to be a home computing machine, featuring a TV modulator and joystick ports, while the A3020 targeted the home office and educational markets, featuring a built-in 2.5" hard drive and a dedicated network interface socket . Technically, the A4000 was almost identical to the A3020, only differing in hard disk size (3.5" in the A4000), though it sported a different appearance. All three ARM250-based machines could be upgraded to 4MB with plug-in chips (though the A3010 was designed for 2MB, third party upgrades overcame this) and one "mini-podule" slot as used for internal expansion in the A3000.

Also in 1992, Acorn introduced a laptop computer called A4 that featured an ARM3 processor like the A5000, even though it had a slightly lower clock speed, and a LCD screen capable of displaying a maximum resolution of 640 × 480 pixels in 15 levels of grey. However, it did feature a monitor port which offered the same display capabilities as an A5000. A notable omission from the machine was a built-in pointing device, requiring users to navigate with the cursor keys or attach a conventional Acorn three-button mouse.[4]

The A7000, despite its name being reminiscent of the Archimedes naming conventions, was actually more similar to the Risc PC — the line of RISC OS computers that succeeded the Archimedes in 1994. It lacked, however, the DEBI expansion slots and multi-slice case that characterized the RiscPC (though by removing the CDROM, a backplane with one slot could be fitted).

The Archimedes was one of the most powerful home computers available during the late 1980s and early 1990s; its main CPU was faster than the 68000 microprocessors found in the more popular Atari ST and Commodore Amiga machines. An 8 MHz 68000 had an average performance of roughly 1 MIPS. The 8MHz ARM2 yields 4.5-4.8 MIPS in repeatable benchmark tests [6]

The Archimedes won significant market share in the education markets of the UK, Ireland and Australia; the success of the Archimedes in British schools was due partly to its predecessor the BBC Micro and later to the Computers for Schools scheme organised by the Tesco supermarket chain in association with Acorn, and most students and pupils in these countries in the early 90s were exposed to an Archimedes or A-series computer. Despite a technical edge, the Archimedes only ever met a moderate success beyond the education sector, becoming a 'minority' platform outside of certain niche markets. These niche markets included professional work such as radio, medical and railway station management and music publishing. Another reason why schools chose the Acorn Archimedes over the Commodore Amiga and Atari ST was that students may have taken games into school from their Amiga or ST games collection and would have distracted them from their school work.

The following 25 pages are in this category, out of 25 total.