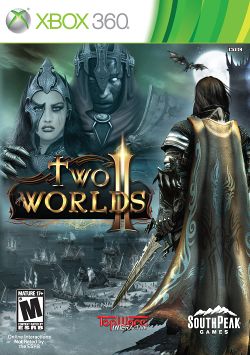 Two Worlds is an RPG developed by Polish video game developer Reality Pump and published by SouthPeak Interactive for the Xbox 360 and PC.

The game takes place in a real-time three-dimensional fantasy landscape. As such it has drawn comparison with The Elder Scrolls IV: Oblivion. Much like in Oblivion and Gothic 3, the gameplay is non-linear. The player is free to explore the game world, accepting side quests at will. There is however, a core quest, centering around rescuing the protagonist's sister, who is being held for ransom by mysterious forces who are scheming to open the tomb of Aziraal, the god of war.

The game does not utilize fixed character classes like other role playing games. As the character gains experience and levels, it is possible to invest gained Attribute Points into any attribute, leading to a variety of game play styles and approaches.

The world in which the game takes place is called Antaloor. While traveling through the game the player will encounter new teleports, caves, villages, and other locations, and these travels are recorded by the in-game mini-map. Teleports allow rapid travel between explored regions. Horses are available for the player to ride as well as other animals/creatures, though a number of commentators have lamented the clumsy controls when mounted.

Death in the game leads to resurrection at a nearby shrine; these shrines are distributed across the game world, and also replenish health when the player comes in sufficient proximity.

There are various creatures in Two Worlds. Unlike other CRPGs with wilderness areas, enemies will not respawn, although most areas are densely populated.

Beyond the main quest there is no set storyline to follow, the player is free to choose to complete the quests of his/her liking, and explore at will. The player may choose to act as a righteous hero and be honored amongst the population, or devilishly evil and feared, through reputation gained by completing certain quests. However, the path chosen will have consequences on the outcome of the game.

Two Worlds has an alchemy system that allows the player to combine ingredients to make potions, weapon enhancements, traps, and bombs. Spending Skill Points on the Alchemy Skill or using more ingredients will result in more powerful potions. Ingredients can be found as plants in the wild, the body parts of animals and monsters that have been slain, and minerals and gems taken as loot or collected off the ground. Some potions can have permanent effects such as a boost to strength, health, dexterity, magic and etc.

There are seven factions within the game for which the player can complete quests to gain reputation. These are the Brotherhood, the Society, the Merchants Guild, the Giriza, the Necromancers, the House Skelden, and the Karga Clan.

The player can choose to work with any faction to achieve specific goals in the main quest. As is typical for the genre, players generally earn reputation with a faction by completing appropriate quests.

Should a player decide that they are unhappy with their ability and skill point distribution, there are NPCs called "skill changers" in some of the larger cities that offer a "regression", which allows redistribution of some skill points for a certain price. Some of the Skill changers can refund more points for a greater cost, depending on the character's level and amount of experience.

A multiplayer element is included. Activities include horse racing, combat and quests. Single-player and multi-player characters are kept separate and not shared between modes.

While the Xbox 360 version is limited to eight players, the PC version allows a significantly greater number. However, they must be grouped into parties of no more than eight.

Using the multiplayer element in Two Worlds allows the user to change race; neither this nor the race of Elves are present in single player mode.

Two other versions of the game have been released. The Collector's Edition was released on August 23, 2007 in the U.S. It features the game, two bonus cards with codes to unlock exclusive weapons, a bonus disc, map and a handbook.

The Royal Edition was released in Europe for the PC and Xbox 360 on September 7, 2007. It comes with a t-shirt, marked with the Two Worlds logo, a deck of playing cards, a poster with the world map, letter opener (only available in the PC version) and a bonus disc.