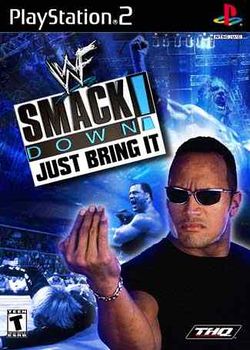 WWF SmackDown! Just Bring It (Exciting Pro Wrestling 3 in Japan) is a professional wrestling video game released on the PlayStation 2 console by THQ and developed by YUKE's Future Media Creators. It was released in Europe on November 16, 2001, in the United States on November 19, 2001, and in Japan on January 24, 2002. The game is part of the WWF SmackDown! (later renamed WWE SmackDown vs. Raw, now simply WWE) series based on the World Wrestling Federation (WWF) professional wrestling promotion. It is also the sequel to WWF SmackDown! 2: Know Your Role and was succeeded by WWE SmackDown! Shut Your Mouth. This was the first game in the series to be featured on the PlayStation 2. The game ended up selling more than 400,000 units, to which it was added to the Sony Greatest Hits collection for the PlayStation 2 and became THQ's second Greatest Hits game, only bested by Red Faction. However, when the game was given the Sony Greatest Hits label, it was renamed to WWE SmackDown! Just Bring It because of the World Wrestling Federation's recently lost worldwide court battle to the World Wildlife Fund, to which the World Wrestling Federation was renamed to the World Wrestling Entertainment (WWE).