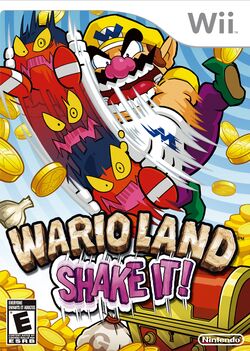 The game was developed by the Japanese company Good Feel, headed by the former CEO of the now-defunct Konami Computer Entertainment Kobe branch, Shigeharu Umezaki. It includes an animated opening and ending, created by anime studio Production I.G. This is the first game in the series to feature hand-drawn graphics rather than pixelated sprites.

sideways and shakes it to attack enemies and perform special moves. These include grabbing items and enemies and shaking them to produce coins, and grabbing a rope flipping upwards.

Within an ancient globe exhibited at a museum, there is another world called The Shake Dimension. The Shake Dimension's peace is shattered by the marauding pirate Shake King. Queen Merelda (who matches a resemblance to Saria, probably making her a cameo) and her Merfle subjects are imprisoned and Shake King claims the legendary "Bottomless Coin Sack," which spits out coins when shaken. Female pirate Captain Syrup observes The Shake Dimension's crisis from the outside world. Desiring the legendary treasure, she steals the Ancient Globe and sends it to Wario to avoid the actual work of stealing it.

Beseeched by the Queen to become a hero to the kingdom, Wario works his way through the worlds collecting various, yet odd, treasures. Eventually he must face the Shake King to retrieve the Bottomless Coin Sack for Queen Merelda.