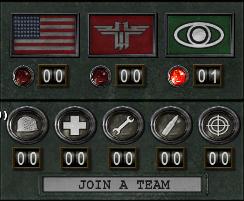 In Wolfenstein: Enemy Territory, the player can choose 5 different classes. Each has a different task in the team. This page also lists the weapons available to each class. Some weapons, however, are used by all classes, and are described below. As aforementioned, each class has a particular role in combat - it is very difficult, and sometimes impossible, to win using one class alone. The best players are the versatile ones - ones that can play any class well.

The diagram to the right allows players to pick from one of three sides, starting from left to right:

Spectators can view the match from any angle they wish, or can jump into a particular player and watch them.

Axis and Allies have identical classes, and are represented by the various icons beneath each team's flag.

Soldiers are the base grunt on every team. Despite this you won't see too many of them amongst experienced players - while they can wield the largest number of weapons, they also do not have the healing power of medics, the dynamiting ability of engineers, or the explosive power of field ops. Since every class can hold a submachine gun, it is often not a good idea to have a soldier with a submachine gun. One might as well, if one is a soldier, use the specialized weaponry that only soldiers can use.

Heavy weapons are the soldier's specialty. Heavy weapons, however, slow your character down considerably while equipped (though movement speed can be recovered through experience). Soldiers have a semi-exclusiveness to the heavy weapons skill. Other players can upgrade it by using mounted MG-42s, but soldiers can use mounted MGs, portable MGs, flamethrowers, Panzerfausts, or mortars to gain EXP.

Because heavy weapons can seriously alter the balance of the game, some servers prohibit them or require that some minimum number of players are present for heavy weapons to be available.

Medics often start with barely any ammo (a single clip for a submachine gun and a single grenade) but the power to create health and use syringes to assist your teammates more than compensates. Whenever a player is wounded, she or he can either rest and wait for a medic, or press the space bar (jump) to enter the respawn queue. If a medic is nearby, the medic can use the syringe on the wounded player (with the red syringe icon appearing over them) to revive the wounded player (health regeneration is based on the medic's first aid skill level). They won't have to walk all the way back to where they died previously, or wait to respawn. It also gives the medic some experience, so resurrecting players is almost always a good idea.

Medics carry either the Thompson (Allies) or the MP-40 (Axis) as their primary weapon.

As mentioned earlier, medics can use the Syringe on wounded allies. So long as the icon to the right is visible, prodding an ally with the syringe will allow them to get up and fight again. Aside from giving you experience, it also allows an ally to not wait a full spawn cycle and get back in the game sooner. Additionally, it helps your friend by reducing the time it would take to walk back to where they were previously. The syringe can be activated with 5 (default button) and be used with the fire button. While the player is being revived, and for a short time after that, he obtains temporary immortality. If you know an air-strike is about to occur, you can revive a player just before it hits the ground so that they are immune to its damage (however, the medic will die).

Medics also carry Health Packs which players of either team can pick up. It is best, therefore, to use it at point-blank range on a wounded ally, so that the enemy will not pick it up later. Medics gain experience for every health pack they pick up. Note, however, that enemies can pick them up as well. Naturally, medics do not gain experience when an enemy picks them up.

The presence of medics also slightly increases every player's max hit points for your team. The bonus, however gets smaller and smaller the more medics there are. Beyond three medics, there is no change at all.

Engineers are the core of objective-completing. Most players pick the engineer for one of two reasons - the rifle grenades, or the ability to complete objectives. Both are the engineer's strengths. Dynamite is the strongest explosive in the game - if it can't be destroyed by dynamite, it either requires a vehicle or it simply cannot be destroyed. Engineers specialize in explosions - they carry up to eight grenades, the most in the game. Combine this with the ability to lay mines and the dynamite to fill the entire map with explosions sooner or later.

Engineers can carry either a submachine gun (Thompson for Allies, MP-40 for Axis) or a semiautomatic rifle - the M1 Garand or the K-43. Both cause, shot-for-shot, more damage, but have a considerably lower rate of fire. The M1 Garand has the unfortunate disadvantage of not being able to reload mid-clip, requiring a player to expend all of his or her ammo before reloading (though some servers have removed this). The K-43 is generally much better than the M1 Garand as a result.

These rifles have remarkable power, however, when outfitted with a grenade. By right-clicking, an engineer can attach a grenade to the end of his or her rifle. When fired the grenade flies in an arc and explodes almost as soon as it hits the ground. The latter element is what makes rifle grenades so deadly; unlike hand grenades, which must be cooked first, rifle grenades are already cooked for you. Additionally they have a very long reach, and are second only to mortars for range. This makes rifle grenades effective against enemy emplacements, namely machine gun nests.

Note that rifle grenades take a sizeable chunk out of a player's power meter. A rifle grenade can be attached, but not fired, when there is not enough power.

Engineers, as mentioned before, specialize in lots of explosions.

When near an objective or near an enemy dynamite or mine, an icon appears to let you know that you can use the pliers on it to either build it or disarm it. Note that while engineers have the pliers, they are not immune to landmine explosions. The flak jacket gained when the player's engineering skill is maxed out, however, can make the engineer a powerful mine-clearer by simply sprinting through an enemy minefield.

Field Ops are essentially a more offensive supporting role. They are considerably deadlier than Medics, but have a similar ability. Field Ops can distribute ammunition in the same manner Medics dispense health. Field Ops, however, are deadliest when employing their marker flares and binoculars. Pressing B and then firing will summon an offscreen artillery strike in a hexagonal area in the vicinity of the target. The resulting explosions are often more than enough to kill mostly anything, and can make an area impassible for the duration of the strike.

Marker flares work similarly to the binoculars, but instead have an airplane fly overhead and drop a string of bombs perpendicular to the Field Ops' facing direction. The explosions are more concentrated and thus more deadly, but against infantry they are somewhat overkill. They are extremely powerful at, however, disabling vehicles, whose large profiles mean they are struck multiple times.

Field Ops have only either the MP-40 or the Thompson submachine gun as a selectable weapon.

Covert ops are the odd men out in terms of classes. They are very different from other classes, relying on stealth of all kinds, and their weapons show it - most of their weapons are either stealthed or can operate only at extreme ranges. Players who enjoy sniping others will enjoy playing as the Covert ops class. Perhaps their biggest feature, however, is the ability to pose as another player.

Keep in mind that being hit when looking down a scope will cause you to lose your zoom.