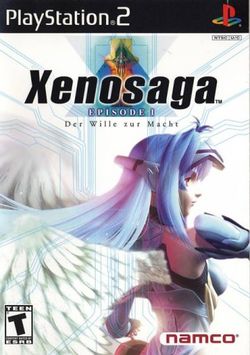 Xenosaga Episode I: Der Wille zur Macht (ゼノサーガ エピソードI 力への意志, Zenosāga Episōdo Wan Chikara e no Ishi?) is a console role-playing game for the PlayStation 2 and the first title in the Xenosaga series. Der Wille zur Macht, "The Will to Power", is a reference to Friedrich Nietzsche's eponymous concept of an assumed rudimentary a-teleological force that elicits all activity stinted to existence itself. While supplies lasted, anyone who pre-ordered Episode I received a limited-edition artbook featuring original art from the game.

Episode I mainly serves as an exposition for the characters and the developing plot. After Dr. Matsuda discovers the Original Zohar in 20xx AD in Turkana, Kenya, the focus shifts to the transport of a Zohar Emulator aboard the Galaxy Federation starship Woglinde. The Zohar Emulator was discovered in the wake of the disappearance of Ariadne. The Woglinde is also home to Vector Industries' KOS-MOS development project headed by Shion Uzuki. The project proceeds through a test experiment on the battle android KOS-MOS, during which a young girl (Nephilim) is encountered. After the test, Shion encounters Nephilim again while investigating the Zohar Emulator. Eventually, the Woglinde is attacked by a group of Gnosis, who are after the Emulator. This attack is partly orchestrated by U-TIC Organization operatives Vanderkam and Cherenkov, who wish to acquire the Emulator for their boss, Margulis. During the attack, KOS-MOS is activated suddenly, the Gnosis escape with the Emulator, Shion and Cherenkov are touched by Gnosis, and the U-TIC operatives escape (sans Cherenkov, who joins up with Shion and crew).