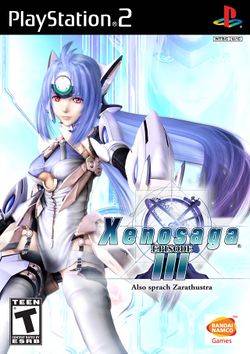 Xenosaga Episode III: Also sprach Zarathustra (ゼノサーガ エピソードIII ツァラトゥストラはかく語りき, Zenosāga Episōdo Surī Tsaratusutora wa Kaku Katariki?) is an RPG for the PlayStation 2, and the third and final game in the primary Xenosaga trilogy. Also sprach Zarathustra, literally "Thus spoke Zarathustra", is also the title of Friedrich Nietzsche's most famous work, which introduced the concept of the Übermensch and popularized the phrase "God is dead". The game was released on PlayStation 2 on July 6, 2006 in Japan and on August 29, 2006 in North America.

It is one year after the events of Episode II and Shion Uzuki has left Vector Industries. After the "Missing Year" fiasco, in which she uncovered information that revealed her former employer's shadowy intentions and her father's involvement with the U-TIC organization, Shion joined the anti-Vector group, Scientia. The villainous CEO of Vector Industries, Master Wilhelm, is trying to take over the universe. While separated from her comrades from previous Xenosaga games, save Canaan and Miyuki, she is inexorably drawn back into their intertwined fates when she is contacted by Allen Ridgely. Shion travels to Fifth Jerusalem, where the previous Xenosaga crew is reunited. At the CAT Facility, a mysterious new researcher, Roth Mantel, has unveiled a next-generation model of android named T-elos, who bears a startling resemblance to KOS-MOS. After a series of experimental demonstrations, overseen by such VIPs as Juli Mizrahi, Mantel informs the Vector staff that the KOS-MOS project is being scrapped. Jr. and the others stage an infiltration into the CAT Facility and recover KOS-MOS before rendezvousing with the Durandal.