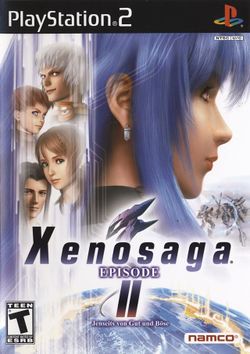 Episode II begins with a flashback of the Miltian Conflict, where chaos and Canaan are ordered to pilot E.S. Asher to Old Miltia and retrieve the U.R.T.V. units from the Realian rioting near Labyrinthos, the U-TIC Organization headquarters. Along the way, the two men encounter Federation officer Jin Uzuki, who is investigating the root of the Conflict. Uzuki believes that the entire Conflict is a set-up to turn U-TIC into a scapegoat, which, in turn, will keep the larger organization hidden in the shadows. Jin Uzuki holds what that organization wants: the Y-Data, which holds the key to Joachim Mizrahi's research on the Original Zohar. The trio encounters U-TIC operative Margulis along the way, who demands that the Y-Data be returned. Uzuki defeats Margulis in a swordfight. Canaan is then entrusted with the Y-Data, which is the last thing that Canaan remembers from the Conflict before a dark shadow engulfs him.