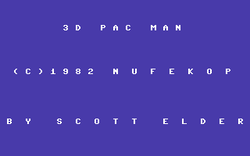 3D Pac-Man, also known as 3-D Man, is an action game that was released by Nüfekop Software for the Commodore 64 in 1982 (only in Germany); as the name suggests, it features Namco's signature character Pac-Man, but the player must use a joystick to control him from a first-person perspective. The maze is the one from the original Pac-Man and Pac-Man Plus, but only contains 178 pellets (as opposed to 244) - and the Pillen-Vorrat (which means "pills stock") and Leben (which means "lives") indicators on the monitor's right side show the amounts of remaining pellets (as a number) and lives (as Pac-Mans), but the radar display of the maze below them only indicates Pac-Man's position in it and doesn't show the positions of the remaining pellets or ghosts, so it can be difficult to remember where the remaining pellets and ghosts are (but if a ghost appears, it is advisable to back away, as they will not follow Pac-Man). 14 years later in 1996, Virtuality Group took the first-person Pac-Man concept and made it more official by releasing Pac-Man VR under license from Namco themselves.