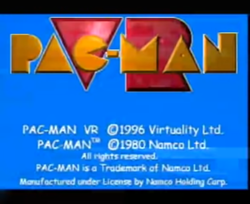 Pac-Man VR is an arcade game that was released by Virtuality Group in 1996; it was produced under license from Namco, who are the original inventors of the Pac-Man series, and was the first US-made Pac-Man game since Bally Midway's Professor Pac-Man in 1983. After getting into the game's virtual reality pod, the player will have to wear a headset called a "Visette" that has two flat-screen monitors inside it and use a handheld joystick to take control of Pac-Man from a first-person perspective - and the headset has sensors in it that can find Pac-Man's position in the game's maze (if the player looks left or right, Pac-Man will turn in that same direction, and if the player sits down, Pac-Man will crouch, but if they look up, he will peer over the maze's walls). If the player pushes the button on the joystick, Pac-Man will move forward; he is also chased around the maze by the four original ghosts, who now all have evil grins on their faces. Much like in SemiCom's unofficial 1995 sequel Hyper Pac-Man, the gameplay is timed, but unlike in that game, Pac-Man may earn extra time by eating regular pellets to fill the "extra time" meter at the top of the screen - and once he has filled it up completely, the text of "EXTRA TIME" will flash on the screen as the alarm-clock-like timer in its top-right is partially refilled.