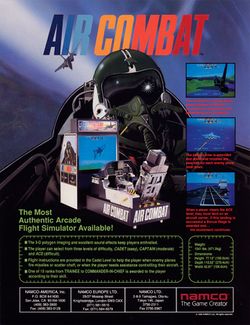 Air Combat (Ace Combat in Japan) is a flight simulation first-person shooter arcade game that was released by Namco in 1992; it runs upon Namco System 21 hardware, and was later ported to the PlayStation in 1995. The game simulates an F16, mainly involves dog fighting, and has three levels of play: Cadet, Captain and Ace. A sequel named Air Combat 22, so named because it runs upon Namco System 22 hardware was released in 1995; this too was ported to the PlayStation, and released in North America as Ace Combat 22.

Air Combat also spawned an entire host of direct-to-console sequels on the PlayStation 2, PSP, GBA, Xbox 360, and iPhone. Next to their ever-popular Pac-Man series, it is the company's longest-running franchise - as the World Stadium series, which featured real baseball teams from the Japanese Central and Pacific Leagues, ended in 1999 after running for eleven years and as many games, if you include SWS92G.

The game's story begins when a terrorist force starts an uprising and inflicts massive damage across an unidentified country; efforts to defeat the terrorists through conventional means has failed and the situation turns desperate. In response, a mercenary air force has been assembled to take the fight to the enemy, and free the nation from the terrorist forces - they must not fail the nation in their mission.