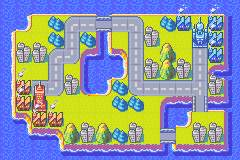 Day 1: Create an infantry unit at all four bases. 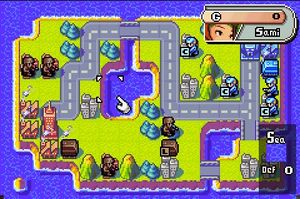 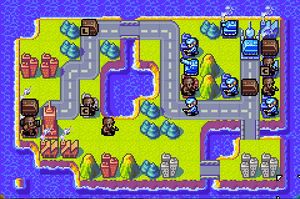 Day 5: From here, Olaf will either move his artillery unit down or to the left. Either way, tell the infantry unit to finish capturing the city. Next, send the infantry unit in the top right up two spaces and right one and begin capturing one of Olaf's bases. Send the APC that unit was in up, setting it on top of the Olaf's base one space above that infantry unit. Whether or not it puts your APC in range of the artillery unit, move the APC at the bottom three spaces right and four spaces up, then drop the infantry unit in the space to the right. Back at your base, load the mech unit into the APC and send it as far as you can up the road. This should be just out of reach of the tank Olaf just built (or out of reach of the artillery if he sent it to the bridge). In the top left two bases, build an APC and a mech unit in the same spot that you did last turn (APC on top and mech unit just below). With the last two infantry units, use the one on the left to begin capturing the nearby base and send the other one down two spaces and right one.

Day 6: If you lose your APC here, that's okay. Finish capturing Olaf's base, then send the other infantry unit in that area either up three spaces to capture the base in the corner or move the APC and begin capturing the base that it was resting on. With the infantry unit in the lower left of the cities on Olaf's island, if you can hit the artillery unit without moving from the city, do it. Otherwise, attack the infantry unit standing on the street below. Send the loaded APC at the top left all the way right until it's sitting next to Olaf's recon unit, then drop the mech unit onto the space below. If you can use an APC to divert attacks from your other units, do it, even if it means leaving an APC in the path of artillery shells. Back at your base, load the mech unit into the APC and once again send it as far as you can up the road. Once again, at the left-most bases, build an APC on the top and a mech unit below it. If the remaining infantry unit can get close enough to attack the artillery, get him there. Otherwise, move him to the right, toward the forest, until he's just out of the artillery's range (or as far as it can go if the artillery is elsewhere).

Day 7: Olaf will likely try to knock the units off of the bases, but focus on capturing them before you return fire. Move the infantry unit that captured the lower-most of his bases down so he's out of the way, then build an artillery unit on the base he captured. Move the mech unit in Olaf's corner forward and attack the APC sitting on his HQ. Move the APC that dropped it so that it is in range of the tanks in the area, so they are distracted from your new artillery. If not needed, then just move it back down the road the way it came. Now send the APC loaded with a mech unit and set it on the piece of forest where the other one just moved from, blocking the tank in, then drop the mech unit in the space below. In your base, load the mech unit into the APC and send it up the road. Keep picking away at the artillery unit any chance you can, even if it's only 2 at a time.

Day 8: First thing, use your artillery to batter the APC sitting on his HQ. Use the mech sitting next to the APC it to blast the last ones away, then move the other mech units onto the HQ and begin capturing it. With your other units, move them to block the mech units taking the HQ, building units at your bases in his area if they become exposed. If an APC is badly beat up, protect it too or move it out of harm's way. You can move your last APC in and drop the mech unit in the same way you have the last three, but you shouldn't really be needing him.

Day 9: Take the base, and the game is yours.

Day 1: Build two infantry units on the upper two bases and one on the lower right base

Day 2: Send the infantry on the bottom right 2 spaces and down 1 and begin taking the city. Send the uppermost infantry 3 spaces right and begin taking that city, while the remaining infantry moves 3 spaces up to take the city up there. Build an infantry unit at the top-most base and a recon unit just below it.

Day 3: Continue capturing bases with the infantry units, and send the one you created last turn up 2 spaces and right 1 to take another city. Send the recon unit as far up the road as it can go, then build a tank at the lower right base.

From here, continue building tanks in the bottom right space and swarming them into his base, holding tanks on top of his bases when you can.