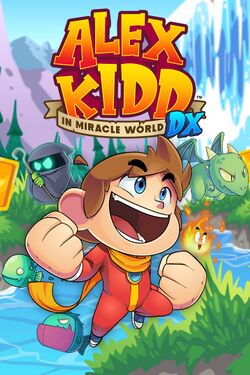 Alex Kidd in Miracle World DX is a remake of the first game, and was announced on June 10, 2020, and released on June 22, 2021. The game is developed by Merge Games and Jankenteam for PlayStation 4, Xbox One, PlayStation 5, Xbox Series X/S, Nintendo Switch and PC.

The remake features new levels, new NPCs, alternate boss fights, and can instantly change between modern or retro style graphics by using the right trigger button. Once the player completes the game, the player unlocks 2 other modes; Classic Mode: which is an upscaled Master System port of the original game, and Boss Rush: where the player must defeat all the bosses at Rock Paper Scissors and follow up battle without dying.