There are three different endings; which one you see is determined by how long it took for you to complete the game and how many times you continued. All three are variations of the same ending, but with different twists. 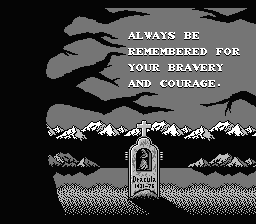 Neither Simon nor Dracula survived their last battle.

Complete the game in 15 days or more.

Dracula's grave is shown and text appears telling you that "The battle has consummated. Now peace and serenity have been restored to Transylvania and the people are free of Dracula's curse forever. And you, Simon Belmont, will always be remembered for your bravery and courage." 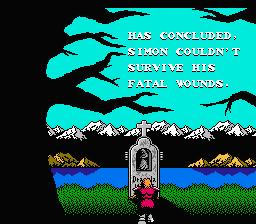 Simon vanquishes Dracula, but succumbs to the deadly curse placed upon him.

Simon kneels by Dracula's grave and text appears telling you that "Although the confrontation between Simon and Dracula has concluded, Simon couldn't survive his fatal wounds. Transylvania's only hope is a young man who will triumph over evil and rid the city of Dracula's deadly curse." 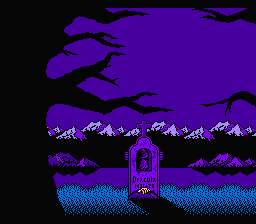 Dracula has been defeated and Simon is free of the curse.

Complete the game in 7 days or less.

Simon kneels by Dracula's grave and text appears telling you that "The encounter with Dracula is terminated. Simon Belmont has put an end to the eternal darkness in Transylvania. His blood and sweat have penetrated the earth and will induce magic and happiness for those who walk on this land." Simon walks away from the grave and that night Dracula's hand pushes through the dirt.