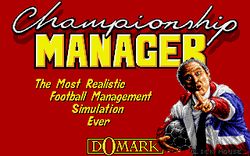 Championship Manager features a modified version of the four professional divisions of English football at the time - Divisions One, Two, Three and Four. In the game, each division only contains twenty teams, whereas in reality, the three lower divisions contained 24 teams each. The missing teams are included in the game as "non-league" teams, but they cannot be managed. The game also features the English domestic cups - FA Cup, Rumbelows Cup, Zenith Cup plus a fictional Domark Trophy and the 3 major continental cups - the European Cup, UEFA Cup and Cup Winners' Cup.

The code from this game was used by Intelek and Ubi Soft to produce Guy Roux Manager, a fully localized version of CM for the French market. As well as all in-game text being translated into French, it also features Ligue 1 and Ligue 2 (the top two tiers of the French football league system) as its playable divisions.