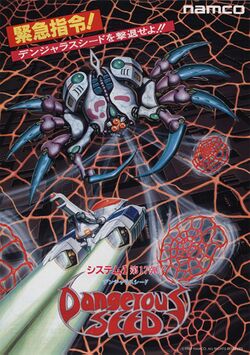 Dangerous Seed (デンジャラスシード, lit. Denjarasu Shiido) is a vertical scrolling shooter arcade game which was released by Namco in 1989 only in Japan; it runs upon Namco's System 1 hardware, was the company's last game from the 1980s, and was later converted to the Sega Genesis in 1990. It was also the first game from Namco to include its year at the bottom of the "legal notice" that was typical of their Japan-exclusive 16-bit arcade games - apart from the three notable 1988-1989 exceptions of Beraboh Man, Bakutotsu Kijūtei and Four Trax.

The player starts the game with three separate ships (codenamed Alpha, Beta, and Delta) and must make it through the first four stages of the game by using them individually, starting with Alpha Ship; if Alpha Ship is unfortunate enough to be destroyed during one of these four stages, Beta Ship shall make an attempt to get through, and if Beta Ship is unfortunate enough to get destroyed, Delta Ship shall make an attempt to get through. If Delta Ship is unfortunate enough to be destroyed, however, the game shall be over - but if the player makes it through the fourth stage the three individual ships shall combine themselves into one enormous ship which possesses a massive amount of firepower. Beta and Delta Ship will also combine into a medium-sized ship if Alpha Ship had been destroyed in one of the first four stages; however, the amount of firepower it possesses is not nearly as powerful.